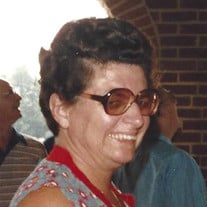 Delores “Dee” G. (Wolf) Fake, of York, entered into rest on Friday, August 9, 2019, at Wellspan York Hospital, at 4:47 pm at the age of 87. She was the wife of the late Glenn E. Fake who entered into rest on December 16, 1987 and is the companion of Robert E. Blouse of York. She was born on July 22, 1932 in York and was the daughter of the late Jacob C. and Minnie A. (Mitzel) Wolf. Delores worked at the former Guy Hobb’s Inc., for 15 years, and then she went to Campbell Chain, retiring in 1993, after 20 years of service. She was a member of St. Paul’s United Methodist Church in Red Lion and she enjoyed listening to pick n packin Blue Grass music and country music. Delores has three sons, Charles E. Wolf and his wife Betty of Red Lion, Glenn E. Fake, Jr. and his wife Flo Ann of York and Larry L. Fake and his wife Donna of York. She was the loving grandmother of five grandchildren and eleven great grandchildren. She has a sister in law, Patsy Wolf of Red Lion along with nieces and nephews. Dee was preceded in death by her brother, Richard E. Wolf. Viewing will be on Wednesday, Aug. 14th, from 6 to 7 pm at Burg Funeral Home, Inc., 134 W. Broadway, Red Lion. A Service of Honor and Praise for Delores will begin at 7 pm at the funeral home, with Rev. Timothy A. Funk, officiating. Burial will be private and will take place in Yoe Union Cemetery, at the convenience of the family. www.BurgFuneralHome.com

The family of Delores "Dee" G. (Wolf) Fake created this Life Tributes page to make it easy to share your memories.