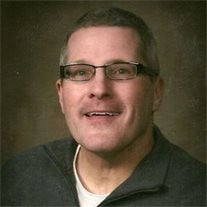 Dennis L. Hughes, 54, received his wish to return home, after a lengthy illness on Saturday, August 4, 2012, at 6:50 a.m. at Rest Haven York. He leaves to cherish his memory, his wife of 21 years, Bobbi J. (Shaffer) Hughes of York, whom he married on July 3, 1991. He was born in York on December 30, 1957, and was the son of the late Donald L. and Janet M. (Runkle) Hughes. Dennis was an Accountant, graduating from York College with a Bachelors Degree. In addition to his wife, Bobbi, he leaves two amazing sons, Austin L and Grant L. Hughes, both of York; a brother, Gregory S. Hughes of York and his wife, Kathryn; a nephew, Bradley S. Hughes of Baltimore, Md., and his wife Eve; a niece, Meredith K. Hughes of Philadelphia; and an aunt, Vivian R. Krout of Dallastown. There will be no viewing. Dennis' family invites you to join them in celebrating his life Sunday, August 12, 2012, at Naylor's Winery, 4069 Vineyard Road, Stewartstown, PA 17363. The visitation will be from 2 to 3 p.m. followed by the memorial service at 3 p.m. with a family friend, Jay McWilliams officiating. Dennis has requested that everyone attending please wear bright colors to honor him and his love of life. Burial will be private and at the convenience of the family Burg Funeral Home, Inc., 134 W. Broadway, Red Lion will be handling the arrangements. If you are considering sending flowers, Dennis has requested that in lieu of flowers, you can offer a donation to the Huntington's Disease Society of America, 502 W. Germantown Pike, Suite 405, Plymouth Meeting, PA 17462 or you can make a donation by going to the website at www.hdsa.org. Dennis' main focus has always been his family. He enjoyed running and watching college football. He loved collecting hand carved decoys, listening to music, eating chocolate, smoking cigars, drinking a good cold beer and making others laugh! He will be greatly missed by all who knew and loved him. On line condolences may be offered at www.BurgFuneralHome.com

Dennis L. Hughes, 54, received his wish to return home, after a lengthy illness on Saturday, August 4, 2012, at 6:50 a.m. at Rest Haven York. He leaves to cherish his memory, his wife of 21 years, Bobbi J. (Shaffer) Hughes of York, whom he married... View Obituary & Service Information

The family of Dennis Hughes created this Life Tributes page to make it easy to share your memories.

Dennis L. Hughes, 54, received his wish to return home, after...

Send flowers to the Hughes family.