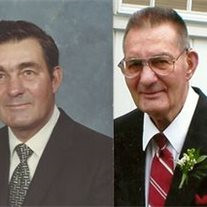 Denton L. "Brownie" Brown, 83, entered into rest at 7:25 p.m. Monday, August 13, 2012, at Manor Care Dallastown. He was the husband of Almeda A. (Lentz) Brown whom he married October 29, 1949. He was born in Red Lion, on August 26, 1928, and was the son of the late Luther L. and Beulah R. (Boyd) Brown. Mr. Brown worked for Kinsley Construction, retiring in 1984 after many years of service, and enjoyed archery. He was an Elder in The Regular Primitive Baptist Washington District Association. In addition to his wife, Almeda, he is survived by three daughters, Brenda Lee Mitchell and husband, Richard of Port Charlotte, Fla., JoAnn Marie Arnold and husband, Donald of York, and Karen Lynn Bloemker and husband, Joseph of Pottstown; six grandchildren, Brandice Lardner of Largo, Fla., Jeremy and Justin Arnold, both of York, Megan Knaub of Midland, Mich., and Daniel and Rachel Bloemker, both of Pottstown; six great-grandchildren; three brothers, Luther B. Brown of Lewisbury, and Royce Brown and Glenn A. Brown, both of York; and many nieces and nephews. There will be a viewing on Friday from 6 to 8 p.m. and on Saturday, August 18, from 9 to 10 a.m. at Burg Funeral Home, Inc., 134 W. Broadway, Red Lion. The service will begin at 10 a.m. Saturday at the funeral home with Elders Aaron Williams and Ronnie Crawford, of The Regular Primitive Baptist Washington District Association, officiating. Burial will be at Dallastown Union Cemetery. In lieu of flowers, contributions may be offered to South Eastern PA Arthritis Foundation, P.O. Box 96280, Washington, DC 20077; or the Salvation Army, 1080 Haines Road, York, PA 17402. Denton was a wonderful husband to Almeda for 62 years and the best father and grandfather. His family always came first and he enjoyed the time that they spent together. He will be sadly missed by all who knew and loved him. Online condolences may be made at www.burgfuneralhome.com

The family of Denton L. Brown created this Life Tributes page to make it easy to share your memories.

Send flowers to the Brown family.