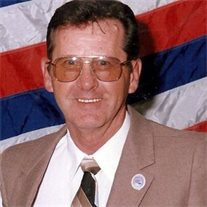 Derroll B. McGinnis entered into eternal rest after a brief illness on Saturday, June 20 at his residence at 9:35 p.m. at the age of 76. Born in Winterstown on May 21, 1939, he was the son of the late Russell R. and Freida (Curran) McGinnis. Derroll was a technician at the former GTE, now known as Verizon, retiring in 1994 after many years of service. He was a graduate of the Red Lion Area High School Class of 1957 and was a Corporal with the United States Marine Corp., stationed in Hawaii. Survivors include brothers, Donald McGinnis of Round Town, and his wife, Phyllis, Kenton McGinnis of Winterstown and his wife, Elaine, and Dana McGinnis of Pasdena, Md. and his wife, Pamela; a brother in law, Mike Herrick of Red Lion; nieces and nephews, Randy Snyder (Jeanie), Jay Snyder, Timothy McGinnis (Lynne) Kirby Herrick, Cindy Walters (Leo), Buddy McGinnis (Ann) and Rusty Herrick (Terri); several great-nieces and nephews. He was preceded in death by two sisters, Kay Herrick and Kathleen Snyder and her husband, Harold. Viewing will be Wednesday, June 24 from 6 to 8 p.m. at Burg Funeral Home, Inc., 134 W. Broadway, Red Lion, and Thurs. from 9 to 10 a.m. at Winterstown United Methodist Church, 12184 Winterstown Road, Felton. A Service of Honor and Praise for Derroll will be on Thursday, June 25 at 10 a.m. at the church. His pastor, Rev. Mitchell M. Galloway will officiate. Burial will be in Winterstown UB Cemetery. In Lieu of flowers, contributions may be offered to Winterstown UM Church "Going Green Project", 12184 Winterstown Road, Felton, PA 17322. Derroll was a member of Winterstown UM Church all of his life, where he held numerous offices. He was the "go to" man, he was always willing to help in any capacity and knew the ins and outs of that church like the back of his hand. He participated in the Mission Trips and locally with Faith Beyond The Pews. He was an avid golfer and a member of the AARP Golf League and Verizon Golf League both at Briarwood He also enjoyed traveling and baseball. Derroll always showed true devotion in everything he did, he was a friend to everyone but most importantly he was devoted to his family and will be missed by all who knew and loved him. On line condolences may be offered at www.BurgFuneralHome.com

Derroll B. McGinnis entered into eternal rest after a brief illness on Saturday, June 20 at his residence at 9:35 p.m. at the age of 76. Born in Winterstown on May 21, 1939, he was the son of the late Russell R. and Freida (Curran) McGinnis.... View Obituary & Service Information

The family of Derroll B. McGinnis created this Life Tributes page to make it easy to share your memories.

Derroll B. McGinnis entered into eternal rest after a brief illness...

Send flowers to the McGinnis family.