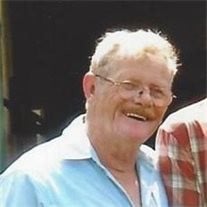 Donald "Butch" E. Taylor, of Red Lion, entered into rest on Sunday, December 25, 2016 at 2:40AM at York Hospital at the age of 72. He is the husband of Barbara A. (Smith) Taylor of Red Lion. Donald was born in Wellsville on June 6, 1944 and was the son of the late Cleatus F. and Margaret V. (Russel) Taylor. He worked as a machinist at Tate Access, formerly Davey Products for 52 years. Butch also worked on a Dairy farm for 30+years. Besides his wife, he leaves four children, Melissa A. Shaull and husband Bret of Red Lion, Jeff E. Taylor and fiancé Kristi Bosserman of Red Lion, Bradley A. Smith and wife Sadye of Windsor and Brandon D. Taylor of Red Lion; 4 grandchildren, Jordan and wife Alexis, Shelby, Aslinn, Aydan; Siblings, Ethel A. Shenberger and husband Robert, Francis E. Taylor and wife Helen. Many nieces and nephews. Donald was preceded in death by a sister, Lilian. Cremation will take place with Burg Funeral Home, Inc., 134 W. Broadway, Red Lion. Friends and family are invited to extend their condolences on Thursday, January 5, 2016 from 4-6pm at The Freedom Center; 68 W Main St #236, Windsor, PA 17366. A Memorial Service of Honor and Praise will begin on Thursday at 6pm at the church with Pastor Ryan Smith officiating. Parking can be found around back of the church. Burial will be at the convenience of the family. He will be greatly missed by everyone who knew and loved him. In lieu of flowers contributions may be offered to American Cancer Society; N, 924 Colonial Ave, York, PA 17403.

The family of Donald "Butch" E. Taylor created this Life Tributes page to make it easy to share your memories.