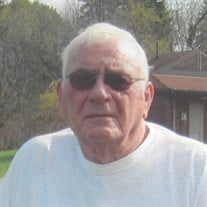 Donald “Don” A. Selack, 85, of Hallam, went home to be with his Lord and Savior, after a lengthy illness, on Thursday, August 9, 2018 at 7: 40 pm, at his residence. He was the husband of Faye R. (Bowser) Selack. He was born in York on June 2, 1933 and was the son of the late John R. and Ruby G. (Stump) Selack. Don proudly served in the United States Marine Corps from 1951 – 1954 during the Korean War. He retired in 1998 from Standard Register Company as Production Superintendent of the York plant after 39 years of employment. He was also a member of the AARP, Veterans of Foreign Wars Post #7045 in Hellam and the Hawkes Gunning Club. He attended Pleasant Grove United Methodist Church in Red Lion. Don enjoyed fishing, hunting, golfing, bowling, gardening, woodworking and cheering for Penn State. Don is survived by his wife of 59 years, Faye; his daughter, Susan Y. Selack of York and his son, Bradley A. Selack of Lexington, KY. He was the grandfather to Nicholas and Madison and he leaves his brother, Barry Selack of Fort Pierce, FL. along with nieces and nephews. Cremation will take place with Burg Funeral Home, Inc., 134 W. Broadway, Red Lion. There will be no viewing. Family and friends are invited to the Memorial Service to Honor and Praise Don on Monday, August 13th which will begin at 2 pm at Pleasant Grove United Methodist Church, 900 Pleasant Grove Road, Red Lion, PA., with his pastor, Terry Robinson officiating. Burial will be at the convenience to the family. At the family’s request, in lieu of flowers, contributions may be offered in Don’s honor to: Pleasant Grove United Methodist Church, 900 Pleasant Grove Road, Red Lion, PA 17356. www.BurgFuneralHome.com

The family of Donald "Don" A. Selack created this Life Tributes page to make it easy to share your memories.

Send flowers to the Selack family.