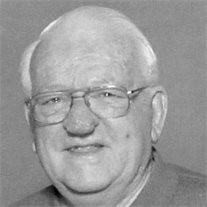 Donald "Foot" E. Gladfelter, 85, entered into eternal rest at 12:28 p.m. Tuesday, February 17, 2015, at Manor Care South, after a brief illness. He was the husband of Rhada F. (Zellers) Gladfelter. He was born in Glen Rock, on December 29, 1929, and was the son of the late Charles F. and Laura Emma (Shaffer) Gladfelter. He was owner and operator of the former D and R Shoe Store in Dallastown for seven years between 1962 to 1969. Foot was a supervisor working at Yorktown Kitchens, retiring in 1984 after 17 years of service. He was a graduate of the Class of 1948 New Freedom High School. Foot was a 63 year member of Winterstown United Methodist Church, where he was on the Usher Committee and was the former Youth Director in the 1950's. He was the former Sunday School Superintendent, was on the welcome committee of the Shining Light Ministries, and he helped coach the church softball team. He was the UB Cemetery Association president and was instrumental in starting the Winterstown Scout Troup in the 1950's. Foot was an avid bowler at Lion Bowling for 50+ years, was an Executive Board member of York County Bowling Association, and participated in the National Bowling Championship Tournaments. He was a member of the Dallastown Lions Club for 35 years, serving on their board and as a past president, and was a member of the Dallastown Water and Sewer Authority. He played baseball and managed teams for the Winterstown and Felton Susquehanna League. He received a trophy in 1955 for "Most Valuable Player" of the Susquehanna League, when he was a knuckle ball pitcher. In 1970 he managed the Dallastown Legion Baseball Team who were the champions in 1972. He enjoyed attending public sales and auctions, which led to collecting baseball cards and glassware. In addition to his wife, Rhada, he is survived by a daughter, Ann E. (Gladfelter) McGinnis and her husband, Kenton, Jr. "Buddy" of Harrisburg; a daughter-in-law, Debra Shultz of Red Lion; and numerous nieces, nephews, and cousins. He was preceded in death by his son, Dennis E. Gladfelter, who entered into rest on February 7, 1988. There will be a viewing from 6 to 8 p.m. Friday, February 20, at Burg Funeral Home, Inc., 134 W. Broadway, Red Lion, and from 9 to 10 a.m. Saturday at Winterstown United Methodist Church, 12184 Winterstown Road, Felton. A Service of Honor and Praise for Foot will begin at 10 a.m. on Saturday at the church, with his pastor, the Rev. Keith J. Schmuck, officiating. Burial will be at Winterstown UB Cemetery. In lieu of flowers, contributions may be offered to Winterstown U.M. Church, "Going Green", 12184 Winterstown Road, Felton, PA 17322. Foot and Rhada were married on February 10, 1951, celebrating 64 years of marriage. He was a wonderful husband and father. He was a Baltimore Orioles fan and enjoyed going on bus trips where he would tour different stadiums and Halls of Fame, if in the area. He toured the Cooperstown Hall of Fame several times. He loved sports and rarely missed any of Ann's sports activities in which she participated during high school and college. In recent years he would go to watch her events at Cedar Cliff High School, where she has been the coach for the last 25 years. He also enjoyed going to and relaxing at the cabin in Caledonia with family and friends for over 30 years. I am home in Heaven, dear ones, Oh so happy and so bright! There is perfect joy and beauty in this everlasting light.

The family of Donald "Foot" E. Gladfelter created this Life Tributes page to make it easy to share your memories.