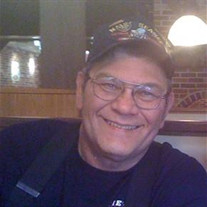 Donald “Donnie” Richard Eveler, of Brogue, was called home on Saturday, February 23, 2019 to be with the love of his life, at the age of 73. He was the loving husband of the late Erma Deanna (Flaharty) Eveler who went home to her Lord on October 29, 2015, with whom he celebrated 38 years of marriage. He was born on October 15, 1945 in Brogueville, and was the son of the late Samuel A. and Grace N. (Haugh) Eveler. Donnie graduated from Red Lion High School, Class of 1964. In 1966 he went into the United States Navy, serving during the Vietnam War where he was a Navy Seabee. He was a Legacy and Lifetime member of the Veterans of Foreign War Post # 1446 Red Lion where he was a charter member and past Commander, a member of the American Legion Post #543 of Red Lion and a member of the Headquarters Post # 945. Donnie enjoyed fishing, hunting, gardening, cooking and being in the outdoors, but most of all, spending time with his family is what his cherished. He leaves his three daughters, Teresa M. Lodrige and husband Richard of Thomasville, Tammy Haney and husband Leslie of Delta, and Angie Eveler and boyfriend Tommy of York. He was the loving grandfather of Alysha Murray and Jessica Mooney (Eric) and great grandfather of, Dustin, Corey, Henley, and Killian. Donnie leaves two sisters, Ruth Flaharty of Morrisdale, PA and Rae Miller of Airville, along with numerous nieces and nephews. He was preceded in death by a brother, Samuel A. Eveler, Jr. A Viewing will be on Friday, March 1, 2019, from 10-11 am at Burg Funeral Home, Inc., 134 W. Broadway, Red Lion. A Service of Honor and Praise for Donnie will begin at 11 am at the funeral home with Pastor J. Scott Potts, officiating. Burial will be at Susquehanna Memorial Gardens with full military rites offered by the York County Veterans Honor Guard. My life’s been full, I savored much. Good friends, good time, a loved one’s touch. Don’t lengthen it now with undue grief. God wanted me now, He set me free. In lieu flowers, contributions may be offered to: VFW Post # 1446, 815 S. Main Street, Red Lion, PA 17356 www.BurgFuneralHome.com

Donald &#8220;Donnie&#8221; Richard Eveler, of Brogue, was called home on Saturday, February 23, 2019 to be with the love of his life, at the age of 73. He was the loving husband of the late Erma Deanna (Flaharty) Eveler who went home to her... View Obituary & Service Information

The family of Donald "Donnie" Richard Eveler created this Life Tributes page to make it easy to share your memories.

Donald “Donnie” Richard Eveler, of Brogue, was called home on...

Send flowers to the Eveler family.