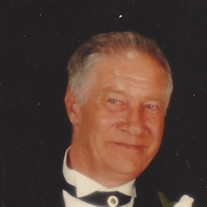 Donald Eugene Frey, Sr., went home to his Lord and Savior, after a brief illness, on Thursday, November 22, 2018, with family by his side, at 4:27 am at his residence at the age of 79. He was the husband of Barbara A. (Garner) Frey whom he married on September 1, 1962, celebrating 56 years together. He was born on September 20, 1939 in Red Lion and was the son of the late Charles H. and Mildred M. (Markey) Frey. Donald graduated from Red Lion High School, Class of 1957. He worked as a maintenance supervisor and retired from Red Lion Junior High School after many years of service. He enjoyed golfing, bowling and watching the old Western movies. Donald attended the Arlington Evangelical Congregational Church in Red Lion where he taught Sunday School Class and served as an usher, and he was a United States Army Veteran. He was an avid Penn State Fan but above all, his family and especially his grandchildren were his top priority. Besides his wife, Barbara, he leaves his daughter, Melanie L. Watts and husband Robert of York Springs, and two grandchildren, Jonathan I. Watts and Alexa L. Watts. Donald also has a brother, Rev. Robert C. Frey of Missouri and numerous nieces and nephews. He was preceded in death by his son, Donald E. Frey, Jr. on July 25, 2015 and by his two brothers, Paul H. Frey, Sr. and Charles T. Frey. A Service of Honor and Praise for Donald will be on Wednesday, November 28th at 10 am at the Arlington Evangelical Congregational Church, 585 Lombard Street., Red Lion, PA. 17356. Viewing will be at the church from 9-10 am. His pastor, Rev. Sterling I. Trimmer will officiate. Burg Funeral Home, Inc., 134 W. Broadway, Red Lion will be assisting the family with the arrangements. Burial will follow the service at Susquehanna Memorial Gardens with full military rites being presented by the York County Veterans Honor Guard. In lieu of flowers, contributions in memory of Donald, may be offered to his church at the address listed above. As I sit in Heaven and watch over you every day, I try to let you know with signs that I never went away. Heaven is truly beautiful, just you wait and see. So live your life, be free, and with every breath you take, you’ll be taking one for me. Until the day we meet again, I’ll be in your hearts forever. www.BurgFuneralHome.com

Donald Eugene Frey, Sr., went home to his Lord and Savior, after a brief illness, on Thursday, November 22, 2018, with family by his side, at 4:27 am at his residence at the age of 79. He was the husband of Barbara A. (Garner) Frey whom he... View Obituary & Service Information

The family of Donald Eugene Frey Sr. created this Life Tributes page to make it easy to share your memories.

Donald Eugene Frey, Sr., went home to his Lord and Savior, after...

Send flowers to the Frey family.