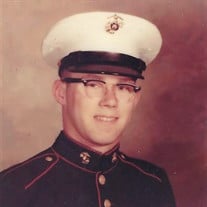 Donald E. (Hink) Hinkle, of York, entered into rest on Thursday, December 5, 2019 at his residence at 8:00 am at the age of 72. He was born in York on December 6, 1946 and was the son of the late Raymond P. and Betty Louise (Becker) Hinkle. Hink was a hazardous waste handler at Harley Davidson of York where he worked for 36 years prior to his retirement in 2009. He was a graduate of West York High School, Class of 1965. After school, he went into the Marine Corp, serving during the Vietnam War. He was a life member of the West York VFW, Post 8951. He is survived by a sister, Patricia A. Holloway of York and a brother, Robert A. Hinkle and his wife Deborah of Red Lion, along with nieces and nephews. Cremation will take place with Burg Funeral Home, Inc., 134 W. Broadway, Red Lion. Graveside Services and burial will be on Wednesday, December 18, 2019 at 11 am, at Indiantown Gap National Cemetery, with full military rites offered. If attending, please meet there by 10:45 am. In lieu of flowers, contributions may be offered to: Kidney Foundation of Central PA, 900 S. Arlington Ave., Ste 134 A, Harrisburg, PA 17109.

The family of Donald E. (Hink) Hinkle created this Life Tributes page to make it easy to share your memories.

Send flowers to the Hinkle family.