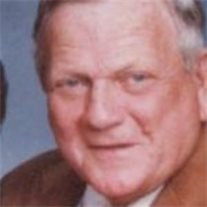 WINDSOR Donald L. "Red" Howard, Sr., 86, entered into rest on Tuesday, August 23, 2011, at 7:14 a.m. at York Hospital. He was the husband of Mildred G. (Gulden) Howard, whom he married on December 24, 1949. They celebrated 61 years together. He was born in Windsor, on September 6, 1924, the son of the late Earl (Smith) Howard and Anna M. (Oberdorff) Howard. He graduated from Red Lion High School with the Class of 1943 He was a machine operator for Grinnell Annville Corp in Columbia, retiring in 1986 after 35 years of service and was a WWII U.S. Navy Veteran. Mr. Howard was a member of Grace Lutheran Church in Red Lion, the Red Lion Athletic Club, the Red Lion Veterans of Foreign Wars Association Post #1446, the American Legion Post #543 in Red Lion, and the 12th Ward Athletic Club in York. Red, as he was known to everyone loved sports, he played for Red Lion High School and with the Baseball Twilight League when they won the championship. He enjoyed spending time at the shore in Ocean City and Cape Hatteras, was an avid fisherman and hunter. In addition to his beloved wife Mildred, he is survived by four sons, Donald L. Howard, Jr. and his wife, Lynn of Airville, Randy L. Howard of Dallas, Penn., and his companion, Susan Johnson, Courtland D. Howard and his wife, Lori Campbell-Howard of Red Lion, and Todd A. Howard and wife, Mary of Ocean Pines, Md.; one daughter, Lori A. Blymire and her husband, David of York; nine grandchildren, Aaron and Ashley Capp, Thomas Howard, Abby Howard, Alex (Erica) Howard, Katherine and Caroline Howard, Dakota Blymire, Nick and Nate Campbell; one great-granddaughter, Jordanna Capp; one brother, Darwin L. Howard of Red Lion and his wife, Edna; numerous nieces, nephews, and cousins. He was preceded in death by a brother, Kermit Howard. Viewings will be Sunday, August 28, 2011, from 6 to 8 p.m. and Monday from 9 to 10 a.m. at Burg Funeral Home, Inc., 134 W. Broadway, Red Lion. The service will be ay 10 a.m. Monday at the funeral home with his pastor, the Rev. Dr. William H. Cluely officiating. Red's son, Pastor Courtland D. Howard, will assist. Burial will be at Susquehanna Memorial Gardens with full military rites by the York County Veterans Honor Guard. In lieu of flowers, contributions may be offered to Grace Lutheran Church "Steeple Organ Fund", 220 N. Charles St., Red Lion, PA 17356 . "Red loved all of his kids the same".

The family of Donald L. "Red" Howard, Sr. created this Life Tributes page to make it easy to share your memories.