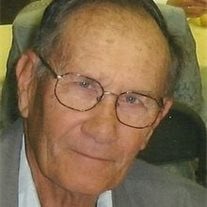 FELTON Donald McClure Ruff, 76, went to be with the Lord on Saturday, December 3, 2011, at 11:41 a.m. at his residence, after a brief illness with ALS. He was the husband of Bonnie C. (Blymire) Ruff of Felton, whom he married on January 24, 1970, celebrating 41 years together. He was born in East Hopewell Twp. on July 23, 1935, the son of the late Samuel L. and M. Jane (McClure) Ruff. He was a diesel mechanic by trade working for IML Freight Co. in Etters, County Line Quarry and Schwerman Trucking Co. retiring in 1997. Donald was a lifetime and very active member of Guinston Presbyterian where he served as an Elder, Trustee and he and his wife served as Sextons for 25 years. He was part of the Guinston Gutters Mission team going on 14 mission trips to New Orleans; he assisted with the Servants group over the past year and also served on the board of Camp Donegal Camp and Conference Committee. A graduate of Red Lion High School class of 1954, he attended Williamsport Technical Institute and served in the U.S. Army. In addition to his wife Bonnie, he has two sons, Carl M. Ruff of York and wife, Tammy and Steven D. Ruff of Felton and wife, Rebecca; one daughter, Diane M. Downs of Taylors, S.C., and husband Jeffrey; eight grandchildren; one sister, R. Ellen Hoffman of Orwigsburg; and numerous nieces and nephews. Visitation will be Wednesday from 12 non to 1 p.m. at Guinston United Presbyterian Church, 14130 Guinston Forge Road, Airville. Burg Funeral Home, Inc., 134 W. Broadway will be handling the arrangements. the service will follow Wednesday at 1 p.m. at the church, with his pastor, Rev. Daniel R. Moore and Rev. John R. Maisch, retired Presbyterian pastor, officiating. Burial will be in Guinston UP Cemetery. t is the wish of the family that in lieu of flowers, a contribution may be offered to The ALS Association, Greater Philadelphia Chapter, 321 Norristown Road, Suite 260, Ambler, PA 19002; or to Guinston Presbyterian Church Mission Fund, c/o Cheri Leiphart, 401 Muddy Creek Forks Road, Brogue, PA 17309.

FELTON Donald McClure Ruff, 76, went to be with the Lord on Saturday, December 3, 2011, at 11:41 a.m. at his residence, after a brief illness with ALS. He was the husband of Bonnie C. (Blymire) Ruff of Felton, whom he married on January 24,... View Obituary & Service Information

The family of Donald M. Ruff created this Life Tributes page to make it easy to share your memories.

FELTON Donald McClure Ruff, 76, went to be with the Lord on Saturday,...

Send flowers to the Ruff family.