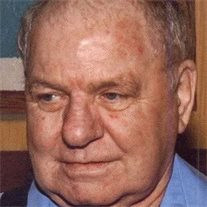 DOVER Donald J. Witmer, 72, entered into rest on Thursday, May 26, 2011 at 11:40 a.m. at York Hospital. He was the husband of Mary G. (Diehl) Witmer whome he married January 10, 1959, celebrating 52 years together. Born in Windsor on May 30, 1938, he was a son of the late Hazel A. (Knisley) and Russell W. Witmer, Sr. Donald was a member of the West Poplar Street Church of God in York. During his early years of marriage he worked in construction for H.J. Williams, and then became a chicken and turkey farmer. Besides his beloved wife, Mary, he is survived by two daughters, Dawn R. Hoover and husband Donald of Hendersonville, Tenn. and Peggy S. Keller and husband Jerry of York; one son, Galen J. Witmer and fiancee Juanita Fadely of Wrightsville; six grandchildren, Megan Clark and husband Aaron of Anderson, S.C., Zachary Hoover of Hendersonville, Tenn., Luke Keller, Abbie Keller both of York, Kaila Witmer of Hellam, and Joshua Witmer of Wrightsville; one great-granddaughter, Claudia Clark of Anderson, S.C.; one brother, Robert Witmer of York; and several nieces and nephews. He was preceded in death by two brothers, Glenn and Russell Witmer, Jr.; and one sister, Elaine Witmer. Viewings will be Tuesday, May 31, from 6 to 8 p.m. and Wednesday, June 1, from 9 to 10 a.m. at Burg Funeral Home, Inc., 134 W. Broadway, Red Lion. The funeral service will be Wednesday at 10 a.m. at the funeral home with his pastor, Rev. Lloyd B. Noaker, Jr., officiating. Burial will be at Susquehanna Memorial Gardens. In lieu of flowers, contributions may be made to the Epilepsy Foundation, 900 S. Arlington Ave., Suite 126, Harrisburg, PA 17109 or to York Health Foundation 'Cancer Patient Help Fund', 912 S. George St., York, PA 17403 or to West Poplar Street Church of God, 919 W. Poplar St., York, PA 17401. Donald enjoyed mall walking with his group of friends, boating and fishing; but most of all, he liked to travel with his wife and spend time with his family. He was a loving father and husband, a very hard worker, and a strong man for his family. He will be sadly missed by all who knew him.

The family of Donald J. Witmer created this Life Tributes page to make it easy to share your memories.

DOVER Donald J. Witmer, 72, entered into rest on Thursday, May...

Send flowers to the Witmer family.