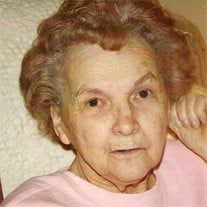 Doris Jean (Brown) Bacon, 84, went from life to life eternal at 2 a.m. Wednesday, January 21, 2015, after a lengthy illness at Rest Haven - York. She was the wife of Vernard W. Bacon. She was born in Brogueville, on July 9, 1930, and was the daughter of the late Roy L. and Lois V. (Crawford) Brown. Doris was a homemaker most of her life and also worked as a Medical Assistant with Mauro Chiropractic of York, retiring after many years of service. She was a life member of St. James Lutheran Church in Brogue. In addition to her husband, Vernard, she is survived by three sons, Michael V. Bacon and his friend, Janet Ziranski of Land O' Lakes, Fla., Marlyn L. Bacon and wife, Cindy of Red Lion, and Wayne E. Bacon and wife, Cindy of Wellsboro; six grandchildren; six great-grandchildren; four sisters, Alma Fillmore of York, Evelyn Bender of Brogue, Ferne Waltemyer of York, and Grace Frey of Yoe; and numerous nieces and nephews. She was preceded in death by a grandson, Derek Bacon on December 27, 2010; two great-grandchildren, Blake in 2003 and Gabriella Thompson in 2004; four brothers, Glenn, Harold, Ross, and Dale Brown; and a sister, Edna Hersey. Viewings will be held Friday, January 23, from 6 to 8 p.m. at Burg Funeral Home, Inc., 134 W. Broadway, Red Lion, and Saturday, January 24, from 9 to 10 a.m. at St. James Evangelical Lutheran Church, 2335 Cramer Road, Brogue. A Service of Honor and Praise for Doris will begin on Saturday at 10 a.m. at the church with her pastor, the Rev. Edgar C. Reed officiating. Burial will be at St. James Lutheran Cemetery. In lieu of flowers, contributions may be offered to St. James Evangelical Lutheran Church, 2335 Cramer Road, Brogue, PA 17309. Doris and Vernard happily celebrated 66 years of marriage on March 27, 2014. She was a very generous, kind, and giving person who was always willing to help others in need. Spending time with her family was very important to her and she adored her grandchildren and great-grandchildren. Prior to her illness, she enjoyed relaxing with a book to read. Online condolences may be offered at www.BurgFuneralHome.com

The family of Doris Jean Bacon created this Life Tributes page to make it easy to share your memories.

Send flowers to the Bacon family.