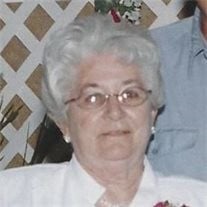 Doris M. ( Cordrey) Vannoy, entered into eternal rest on Saturday, August 6, 2016 at her residence at the age of 87. She was the wife of the late Rev. Millard F. Vannoy, Sr. whom entered into eternal rest on Feb. 20, 2010. She was born in Lancaster on June 20, 1929 and is the daughter of the late George H. and Elizabeth (Kimmey) Cordrey. Doris was a homemaker. She graduated from Lower Chanceford High School, Class of 1947; was a lifetime member of the Society of Farm Women Troup #29; a former member of Brogue Area Ambulance Auxillary; and was a lifetime member of Goram Baptist Church in Brogue, where she was pianist for over 40 years. Doris enjoyed gardening her flowers and canning her vegetables. She is survived by a son, Millard F. Vannoy, Jr. and his wife Sylvia of Cambridge, MD; a daughter, Becky I. Bluett and her husband, Brian of Red Lion; 7 grandchildren, Angela Golden, Travis Vannoy, Sarah Lipchock, Rachael Hopkins, Corrie Axe, Cassie Bluett, Keely Bluett; 4 great grandchildren, Tyler and Sawyer Golden, Simon and Jane Lipchock; a daughter in law, Kay Vannoy; many nieces and nephews. She was preceded in death by a son, Ronald E. Vannoy. There will be a viewing on Wed., August 10th from 9-11 am at Burg Funeral Home, Inc., 134 W. Broadway, Red Lion. A Service of Honor and Praise for Doris will be on Wed. at 11 am at the funeral home with her pastor, Rev. Jason Keenan officiating. Burial will be in New Bethel Cemetery in Stewartstown. In Lieu of flowers, memorial contributions may be offered to, Goram Baptist Church; c/o Kathy Joines, 440 Dull Rd., Felton, PA 17322.

The family of Doris M. (Cordrey) Vannoy created this Life Tributes page to make it easy to share your memories.