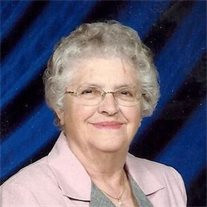 Doris N. (Detwiler) Burke of Red Lion entered into eternal rest on Sunday, April 27, 2014, at her residence at the age of 83. She was the wife of Weldon R. Burke of Red Lion, who she married on November 20, 1948. She was born in Springvale on May 1, 1930, and was the daughter of the late Amos and Esther (Stine) Detwiler. Doris worked at Red Lion School district as a cafeteria worker and manager, retiring after more than 20 years of service. Her Christian faith was a very important part of her life. She was a lifetime and active member of Springvale United Methodist Church in Red Lion. Doris helped her church in the preschool, food pantry, nursery, and also was a Sunday School teacher and a member of the choir. Doris is survived by her husband, Weldon; four children, John Burke and wife Debra of Red Lion, Susan Pritt and husband John of New York, David Burke and wife Leah of Vermont, and Joyce Stoltzfus and husband Michael of Red Lion; seven grandchildren; four great-grandchildren; sister, Mary Strine of Loganville; brother, Joe Detwiler of Huntington County; and numerous nieces and nephews. She was preceded in death by three sisters, Miriam Rusch, Ruth Smith, and Esther Zarfos. A viewing will be held Friday, May 2 from 10 a.m. to 12 p.m. at Springvale United Methodist Church, 265 Circle Drive, Red Lion. Burg Funeral Home, Inc., 134 W. Broadway, Red Lion, will be assisting the family with the arrangements. Service of Honor and Praise for Doris will begin at 12 noon at the church. The Rev. Thomas R. Osenbach, pastor of Bethlehem Stonepile-Springvale United Methodist Church, will officiate. Interment will be in Bethlehem Stonepile United Methodist Church Cemetery. In lieu of flowers, contributions may be offered to: Springvale United Methodist Church at 265 Circle Drive, Red Lion, PA 17356. Doris was a Red Lion sports fan. She was a wonderful mother to her children and a loving wife to Weldon for 65 years. She will be greatly missed by all who knew and loved her. Online condolences may be made at www.burgfuneralhome.com

Doris N. (Detwiler) Burke of Red Lion entered into eternal rest on Sunday, April 27, 2014, at her residence at the age of 83. She was the wife of Weldon R. Burke of Red Lion, who she married on November 20, 1948. She was born in Springvale on... View Obituary & Service Information

The family of Doris N. Burke created this Life Tributes page to make it easy to share your memories.