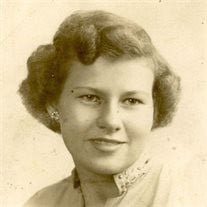 BROGUE Doris A. (McKinley) Posey, 76, entered into rest after a brief illness on Saturday, January 29, 2011, at 1:45 p.m., at her residence. She was the wife of Wilbur V. Posey of Brogue, whom she married on January 3, 1953, celebrating 58 years together. She was born in Woodbine on August 18, 1934, the daughter of the late Charles E., Sr. and Elsie J. (Wales) McKinley. She was a machine operator at the former Catepillar, Inc., retiring in 1995 after 21 years of service. Doris was the owner/operator of Doris' Ceramic Shop for 8 years, and she taught ceramics to 4-H. She was a Red Lion High School graduate of the class of 1952, a cub scout leader, the founding member of the Camping Club So-Lo-Co, which she loved doing, along with gardening for which she was very versed in the names of trees, bushes, flowers and birds. She was active with her card club, played and coached on softball leagues, enjoyed auctions, and was an avid collector of glassware and bells. She is survived by five sons, Jerry Posey of Brogue and wife, Penny, Kerry Posey of Brogue and Julia, Larry Posey of Dillsburg, Wendell Posey of Red Lion, and Daryl Posey of Dallastown and wife, Tina; two daughters, Darlene Speck of Brogue and husband, Denny and Stephanie Posey of Dillsburg; 15 grandchildren; seven great-grandchildren; three brothers, Charles McKinley, Jr., Dale McKinley and Ronnie McKinley, all of Red Lion; one sister, Pat Ilgenfritz of Red Lion; and numerous nieces and nephews. She was preceded in death by a granddaughter, Ali Rae Viewings will be Thursday from 6 to 8 p.m. and Friday from 9 to 10 a.m. at Burg Funeral Home, Inc., 134 W. Broadway, Red Lion. The service will be 10 a.m. Friday at the funeral home, with the Rev. James B. Shuler, pastor of Pine Grove Presbyterian Church, officiating. Burial will be at Bethel UM Cemetery. Contributions may be offered to American Diabetes Association , 3544 N. Progress Ave., Suite 202, Harrisburg, PA 17110. Doris was a wonderful wife, mother and grandmother to her many grandchildren. Her family came first and she always hosted the Christmas Eve family gatherings making it a very special time for each of them. She was lady of many talents, which she passed on to her children and grandchildren.The family would like to extend a very special thank you to Tony and his partner at Eureka EMS Stewartstown Ambulance Association for all of the compassion and assistance given to the family during their time of loss.

The family of Doris (McKinley) Posey created this Life Tributes page to make it easy to share your memories.

BROGUE Doris A. (McKinley) Posey, 76, entered into rest after...

Send flowers to the Posey family.