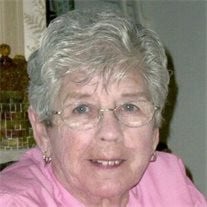 Doris (Tatlock) Stabley went from life to life eternal, surrounded by her loving family and friends at her residence on Fri., Jan 23, 2015, at 2:18 p.m. after a brief illness at the age of 82. She was the wife of Russell E. Stabley, Jr. of Red Lion Doris was born in Warrington, England on May 20, 1932, and was the daughter of the late James and Evelyn (Turner) Tatlock. Doris worked at the former Loyer's Pharmacy in Red Lion; a longtime member of Bethany United Methodist Church. She is survived by her husband, Russell; a son, Russell D. Stabley of Milroy; a daughter, Terri L. (Stabley) Hughes of Red Lion and her husband, Stephen; three grandchildren, Christi L. Gambler and husband Michael of Columbia, Jennifer A. Strayer and husband Joseph of Wrightsville, and Russell E. Stabley IV and wife Kirsten of Belair, Md.; and four great-grandchildren, Caden Spieling and Hunter Stabley, both of Belair, Md., and Parker and Addyson Strayer, both of Wrightsville.; a sister, Edna Matthews of England; and nieces and nephews. She was preceded in death by a great-granddaughter, Faith Hope Strayer, who entered into rest on April 14, 2006; and by her three brothers, James, Peter and Eric Tatlock. Viewings will be held Tues., Jan. 27 from 7 to 9 p.m., and Wed. from 9:30 to 10:30 a.m. at Burg Funeral Home, Inc., 134 W. Broadway, Red Lion. A Service of Honor and Praise for Doris will begin at 10:30 a.m. on Wed. at the funeral home. Her pastor, the Rev. Ronald L. Doverspike, will officiate. Burial will be in Red Lion Cemetery. Doris was a wonderful wife to Russell, to whom she married on September 19, 1955, celebrating 59 years together. She established and maintained homes and family for years in many places as a military wife. She was the past welfare chairman of the Sembach AB Germany NCO Wives Club. She always put her family first, as she was the greatest mother to Terri and Russell, and a very special grandmother who adored her grandchildren and spending time with all of them. So, dry tears of sorrow, for mothers don't die, They just move in with God and "keep house in the sky." And there in God's Kingdom, Mothers watch from above, To welcome their children with their undying love! www.BurgFuneralHome.com

Doris (Tatlock) Stabley went from life to life eternal, surrounded by her loving family and friends at her residence on Fri., Jan 23, 2015, at 2:18 p.m. after a brief illness at the age of 82. She was the wife of Russell E. Stabley, Jr. of Red... View Obituary & Service Information

The family of Doris (Tatlock) Stabley created this Life Tributes page to make it easy to share your memories.