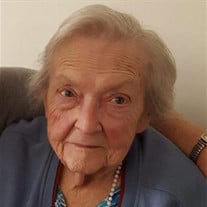 Dorothy M. (Ritz) Weinmeister, formerly of Dallastown, entered into eternal rest on Sunday, July 29, 2018 at 9:47 pm at Pleasant Acres Nursing Home at the age of 96. She was the wife of the late F.E. “Gene” Weinmeister who entered into rest on April 14, 1993. She was born in Crossroads on September 10, 1921 and was the daughter of the late Franklin T. and Emma E. (Silk) Ritz. She worked at several cigar factories and then at Box-Craft in Red Lion and retired from the former Doe Spun after several years of service. She was a longtime member of Guinston Presbyterian Church, a former member of the Fiddlers Association, Good Sam Club CB Radio “Tiny Elf”, she enjoyed camping and traveling. Dorothy has three children, Sharon J. Flaharty and husband Mike of Airville, , Shirley Jennings and husband Charles of Red Lion, Doris Mitzel of. She was the grandmother of Daniel E. Flaharty of New Bridgeville and companion Elizabeth, Michele A. Flaharty of York and Michael R. Flaharty and wife Ashley of Loganville, Debra Forbes of York, Chuck Jennings, Jr. of Red Lion, Gregory Mitzel of New Freedom, Jeffrey Mitzel of Yoe, Bonnie Miller of York and Lisa Ramous , and great grandmother to Isabelle, and Reid, Jamie, Joshua & Chelsey, Hayden, Dalton, Jeffrey, Justin and Alisha. She was preceded in death by two grandsons, LJ Kise and Jason Michael Flaharty and a daughter, Bonnie Roberts. Viewings will be on Thursday, from6-8 pm and Friday, 9-10 am at Burg Funeral Home, Inc., 134 W. Broadway, Red Lion. A Service of Honor and Praise for Dorothy will begin at 10 am on Friday at the funeral home with her pastor, Rev. Daniel R. Moore officiating. Burial will follow at Guinston UP Cemetery. In lieu of flowers, contributions may be offered to; Guinston Presbyterian Church Building Fund, 14130 Guinston Forge Road, Airville, PA 17302. The Lord is my shephard, I shall not want. He maketh me to lie down in green pastures. He leadeth me beside still waters. He restoreth my soul. He leadeth me in the paths of righteousness for His name’s sake. Yea, though I walk through the valley of the shadow of death, I will fear no evil. For Thou art with me. We love you mom and will miss you, but we’ll be together again, someday. www.BurgFuneralHome.com

The family of Dorothy M. (Ritz) Weinmeister created this Life Tributes page to make it easy to share your memories.

Send flowers to the Weinmeister family.