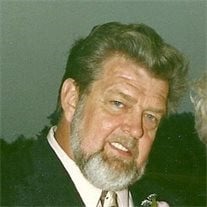 Dwight "Ike" J. Gerst, Sr. entered into eternal rest unexpectedly on Sunday, May 31 at 5:30 p.m. at his residence at the age of 71. He was the husband of Mary Lou (Hedgecock) Gerst, who entered into rest on August 30, 2003. Ike was born in Baltimore, Md. on January 23, 1944, and was the son of the late Robert J., Sr. and Violet (Tollier) Gerst. Ike worked on the production line of General Motors , retiring after 35 years of service. He was a member of the Masonic Lodge #649 Free and Accepted Masons in Red Lion, Supreme Grand Tall Cedars of Lebanon where he was the past District Deputy, Zembo Temple Shrine, High Noon, American Legion Post 455 of Stewartstown and the York Motorcycle Club. Ike was a United States Army veteran. Surviving are three sons, Donald L. McDaniel of Louisiana, James D. McDaniel (Quillian) of Enterprise, Ala., Dwight "Ike" J. Gerst, Jr. (Pam) of Lake Charles, La.; a daughter, Chrystal D. Colflesh (David) of Holmes; seven grandchildren; four great-grandchildren; a sister, Joann Ganzzermiller of Murrieta, Calif.; and four nieces and nephews. He was preceded by his brother, Robert Gerst. Viewings will be held Thursday from 6 to 8 p.m. with Masonic Rites to begin at 7:45 p.m. by the Red Lion Masonic Lodge #649, and Friday from 9 to 10 a.m. at Burg Funeral Home, Inc., 134 W. Broadway, Red Lion. A Service of Honor and Praise for Ike will begin on Friday at 10 a.m. at the funeral home. The Rev. David D. Tietje, pastor of St. John's United Church of Christ in Red Lion, will officiate. Burial will be in Winterstown Evangelical Cemetery. In lieu of flowers, contributions may be offered to Tall Cedars of Lebanon, 2609 N. Front St., Harrisburg, PA 17110. Ike was a good Dad, a hard worker and a good provider for his family. He will be missed by all who knew and loved him. Online condolences may be offered at www.BurgFuneralHome.com

Dwight "Ike" J. Gerst, Sr. entered into eternal rest unexpectedly on Sunday, May 31 at 5:30 p.m. at his residence at the age of 71. He was the husband of Mary Lou (Hedgecock) Gerst, who entered into rest on August 30, 2003. Ike was born in Baltimore,... View Obituary & Service Information

The family of Dwight J. "Ike" Gerst, Sr. created this Life Tributes page to make it easy to share your memories.