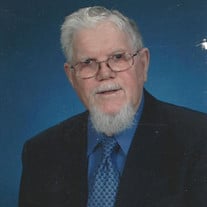 Earl S. Kline, of York, took the hand of his Lord and Savior when He called his name on Tuesday, March 2, 2021 at Misericordia Nursing Home at 7:50 pm at the age of 90. He was the loving husband of Joan E. (Posey) Kline, of York, with whom he celebrated 68 years of marriage in December 2020. Earl was born in Shenks Ferry, on August 6, 1930 and was the son of the late Sylvester E. and Blanche D. (Waltemyer) Kline. He attended the one room schoolhouse in Shenks Ferry and graduated from the former Lower Chanceford High School. Earl worked for the former York Telephone Company, which later became GTE and then he retired from Verizon in 1992, after 37 years of employment. He was a member of the Riverside Masonic Lodge Free and Accepted Masons #606 in Wrightsville and American Legion Post # 469 in Wrightsville. Earl was also a member of the Fourth United Methodist Church in York for twenty years. He was a United States Air Force veteran, serving in the Korean War. He leaves his wife Joan and a son, Bruce Kline of Lewisberry, and his wife Darlene, two granddaughters, Jessica Kline and her partner Andy of York and Jennifer Livelsberger and her husband Chris of Wrightsville, and a step granddaughter, Stephanie Caltrider and her husband Joshua of Dover. He was the great grandfather of three great grandchildren, Camie, Emma and Madi, and four step great grandchildren, Brie-Anna, Adam, Isabella and Leia, and a step great great granddaughter, Karrma. He also has two siblings, Joyce Tome of New Bridgeville, and Julia Shaull of Brogue. He was preceded in death by a daughter Sue Ann Kline, a sister Hilda Shaffer, a step granddaughter, Tammie Schroll and a brother in law, Paul Shaffer. The services for Earl will be private and at the convenience of the family. Burg Funeral Home, Inc., 134 W. Broadway, Red Lion will be assisting the family with the arrangements. Rev. Mitchell M. Galloway retired United Methodist pastor will officiate. Burial will take place at Bethel Cemetery in Brogue with a flag folding ceremony presented by the York County Veterans Honor Guard. In lieu of flowers, contributions may be offered to the York County SPCA, 3159 Susquehanna Trail North, York, PA 17406. Online condolences may be offered at: www.BurgFuneralHome.com

Earl S. Kline, of York, took the hand of his Lord and Savior when He called his name on Tuesday, March 2, 2021 at Misericordia Nursing Home at 7:50 pm at the age of 90. He was the loving husband of Joan E. (Posey) Kline, of York, with whom... View Obituary & Service Information

The family of Earl S. Kline created this Life Tributes page to make it easy to share your memories.

Earl S. Kline, of York, took the hand of his Lord and Savior...

Send flowers to the Kline family.