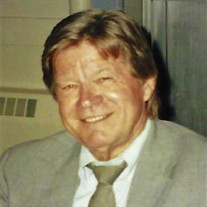 Edward Albert Dellinger, age 85, died on August 28, 2018. He was born on July 6, 1933, the eldest son of Edward and Edith Dellinger. For the past 50 years, Ed has lived in Hellam in the home he designed and built for his family. He was married to the late Binnie Nanette Fahringer since 1959, who entered into rest on September 19, 2001. He was the loving father of E. Craig Dellinger (Phyllis) of Dover, Stephanie C. Threnhauser (Bob) of Enola, Margo B. Dellinger of York, and Jacqueline A. Mikkelsen of New Cumberland. Edward had numerous cousins that he was extremely close too; was a loving grandfather to eight grandchildren, Matt O'Rourke (Jess), Liz Taylor (Shane), Sarah C. Threnhauser, Bobby L. Threnhauser, Shauna C. Threnhauser, Daniel J. Stutzman, Elysia N. Mikkelsen, Mackenzie A. Mikkelsen; four great grandchildren, Leona M. O'Rourke, Olivia Taylor, Isaac Taylor, and Ellis Taylor. Eddie also leaves two sisters; Jane Burkey and Shotzy Schulgen (Bill) all of CA, and a brother, Frederick Dellinger (Fran) of TX, along with numerous nieces and nephews. He was preceded in death by a brother, Dennis Dellinger. Edward Albert Dellinger was raised among Pennsylvania craftsmen, after the 1930's Depression, from where his family ancestors had settled in York County. Those early intriguing years filled him with an earnest desire and insight to copy skills of those talented men and later still, to perform advanced works in the disciplines of engineering. Upon completing three years of military service in Europe, Ed furthered his education in the seven sciences of engineering, obtaining a Bachelor degree from Compton College, CA, resulting in State Certification in 1969. The finest profession, in Ed's eyes, was to apply the fundamentals of science in design. The challenge put him into electrical power applications --it was the beginning of an idea that persisted from one design application to another throughout his successful career as an Electrical Engineer. He loved hiking and was an avid hunter. He was a lifelong member of the Snow Shoe Hunting Club. He was intrigued to explore and write about the processes of the human mind and studied its functions and processes and all aspects of memory. He co-authored a wonderful genealogy on the Dellinger family name, as well as writing a book about his early bird-hunting experiences with his dog Rusty. His interests were varied and he truly loved sharing his experiences and findings with everyone. Cremation will take place with Burg Funeral Home, Inc., 134 W. Broadway, Red Lion. Burial will be private at Macpelah Cemetery at the convenience of the family. In lieu of flowers, contributions may be offered to: Lebanon VA Medical Center, Attn: Voluntary Service Office, 1700 S. Lincoln Ave., Building 18, First Floor, Lebanon, PA 17042, in Memory of: Edward A. Dellinger. Ed will be remembered as a hardworking and generous father, grandfather and great-grandfather. He was a loving husband who supported his family and would lend a helping hand to those in need. His home was always open to his loved ones and friends, and was the destination for many relatives traveling from all parts of the country to visit family. All will remember the joyous times, conversations, the many picnics with excellent cooking, the abundant good food, fun and fellowship. He will be greatly missed by those who knew and loved him.

Edward Albert Dellinger, age 85, died on August 28, 2018. He was born on July 6, 1933, the eldest son of Edward and Edith Dellinger. For the past 50 years, Ed has lived in Hellam in the home he designed and built for his family. He was married... View Obituary & Service Information

The family of Edward A Dellinger created this Life Tributes page to make it easy to share your memories.

Send flowers to the Dellinger family.