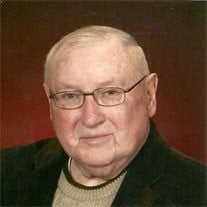 Edward "Ed" J. Tomulis, of York, went peacefully to be with our Lord after a brief illness on August 30, 2015, at 2:00 a.m. at Manor Care Dallastown at the age of 89. He was the husband of MaryAnn M. (Walsh) Tomulis of York. Edward was born in Philadelphia on June 21, 1926, and was the son of the late Charles and Anna Tomulis. In 1940, Edward entered the Christian Brothers at the age of 14, where he was known as Brother Francis Ignatius, for 27 years. He spent 17 of those years as a missionary in the Philippines. Later, he touched the lives of countless students at the Exeter Senior High School, where he was fondly known as "Mr. T" while serving as the Vice Principal from 1971–1989. He then spend the next 7 years as an 8th-grade Social Studies teacher and a reading specialist at Exeter Junior High School until his retirement in 1996. He was a parishioner of St. Patrick's Roman Catholic Church in York for the last 10 years. Prior to that, he was a member of St. Catherine of Siena Church in Reading for 34 years, where he ushered and was active in the nursing home visitation ministry. Surviving, besides his wife, MaryAnn M. (Walsh) Tomulis of York; is a daughter, Ann Marie Tomulis Miller and her husband, Nicholas, of York; 3 grandchildren: Adrianna, Noah and Allison Miller; and several nieces and nephews. He was preceded in death by 3 sisters: Dorothy, Helen and Ann. There will be no viewing. Cremation will take place with Burg Funeral Home, Inc., 134 W. Broadway, Red Lion. A Celebration of Life Mass will be on Saturday, September 12th, at 10:30 a.m. at St. Patrick Roman Catholic Parish, 219 S. Beaver Street, York, PA. Father Keith M. Carroll will officiate at the Mass. Burial will be in Dallastown Union Catholic Cemetery at the convenience of the family at a later date. In lieu of flowers, contributions may be offered to: American Diabetes Association , 3544 N. Progress Ave., Suite 202, Harrisburg, PA 17110. Ed and MaryAnn celebrated 44 years of marriage. He was a avid reader and fisherman. He enjoyed action movies, playing Chess and family game nights. He had a beautiful singing voice and loved to tell jokes and playfully tease others. He loved his dogs, Princey and Sandy. For many years, he enjoyed jogging and walking in Mt. Park. Ed enjoyed Philly Sports and Penn State football. He was loved greatly and will be dearly missed by all who knew him. www.BurgFuneralHome.com

Edward "Ed" J. Tomulis, of York, went peacefully to be with our Lord after a brief illness on August 30, 2015, at 2:00 a.m. at Manor Care Dallastown at the age of 89. He was the husband of MaryAnn M. (Walsh) Tomulis of York. Edward was born... View Obituary & Service Information

The family of Edward J. Tomulis created this Life Tributes page to make it easy to share your memories.

Edward &quot;Ed&quot; J. Tomulis, of York, went peacefully to be with our...

Send flowers to the Tomulis family.