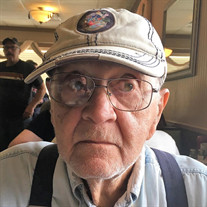 Edwin “Ed” R. Reinhold, of York, entered into rest on Thursday, February 13, 2020 at 3:35 am at his residence at the age of 92. He was the husband of the late Jean D. (May) Reinhold who entered into rest on November 28, 2001. He was born on November 13, 1927 and was the son of the late Joseph Edwin and Annie Rebecca (Myers) Reinhold. He was a model maker, machinist at Fincore Income, retiring in 1990, after 25 years of service. He enjoyed wood working, going to his cabin in the mountains, and spending time with his family. A special thank you to his neighbors, the Shuff’s, with whom he was very close and was always there to help when something was needed. Ed was a United States Army Veteran. Ed leaves a son, Michael E. Reinhold and his wife Cheryl of Red Lion and three step grandchildren, Chad Beaverson, Jodie Matthews and Danny Simmons, three step great grandchildren and a step great great granddaughter and nieces and nephews. He was preceded in death by a son, Jeffrey A. Reinhold in January 2014, step great granddaughter, Lorna Jayne Waltemyer in 2015, a brother Richard Reinhold and a sister Kathryn Furst. There will be no viewing. A Graveside Service to Honor and Praise Ed’s life will begin at 10 am on Tuesday, February 18, 2020, at Mt. Rose Cemetery, with Rev. Steven J. Warner of Grace Baptist Church officiating, flag folding ceremony presented by the York County Veterans Honor Guard. Family and Friends are asked to meet at the cemetery just prior to the start of the service. Burg Funeral Home, Inc., 134 W. Broadway, Red Lion will be assisting with the arrangements.

The family of Edwin "Ed" R. Reinhold created this Life Tributes page to make it easy to share your memories.

Send flowers to the Reinhold family.