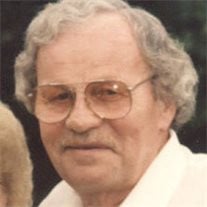 Edwin Lehman, 84, entered into rest at 4:45 a.m. Wednesday, July 28, 2010, at Rest Haven Nursing Center. He was the husband of Anna M. (Keeney) Lehman, his wife of 64 years. Edwin was born in Lebanon, on October 21, 1925, and was the son of the late Edwin and Sarah (Houtz) Lehman and foster son to the late Mark E. and Elsie Fahs Keeney. He was a retired Crane Operator, having worked at the former Cole Steel for 28 years. He also worked on his father-in-law's farm. He was a Life Member of the York Fair Association. In addition to his loving wife, he is survived by his sons, Gary Lehman and wife, Jane of York, and Steven L. Lehman and wife, Kristi of York; daughter, Beverly A. Raney and husband, Raymond of Dover; three grandchildren, Nathaniel Raney (Aimee), Tanya R. Dehoff (Brian), and Mark S. Lehman (Erica); as well as eight great-grandchildren. He is also survived by one brother, Nevin S. Lehman of Red Lion; and one sister, Porthenia Mosebrook of Seven Valleys. His son, Edwin Alan Lehman, preceded him in death. A public viewing will be held from 9 to 10 a.m. Monday, August 2, 2010, at Burg Funeral Home, Inc., 134 W. Broadway, Red Lion. The service will begin at 10 a.m. with Anna's pastors, Keith Hollenberg and Don Hubbel, of the First Church of the Brethren, officiating. Burial will be at Susquehanna Memorial Gardens. Contributions may be offered to VNA Hospice, c/o York Health Foundation, 912 S. George St., York, PA 17403; or First Church of the Brethren, 2710 Kingston Road, York, PA 17402

The family of Edwin Lehman created this Life Tributes page to make it easy to share your memories.

Send flowers to the Lehman family.