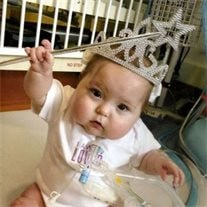 Eirian Brooks Condon was carried by her guardian angels to her eternal home in God's care on Friday, June 5, at 10:40 p.m . at Hershey Medical Center at the precious age of 2. She was born in York on February 24, 2013, and is the daughter of Corey B. and Rheanna (Wolf-Franqui) Condon of Windsor. Survivors, besides her parents, are maternal grandparents, Luis A. and Roni Sue Wolf-Franqui of York; paternal grandparents, Howard F., Sr. and Patricia A. Condon of Felton; paternal great-grandmother, Isabelle T. Condon of Felton; maternal grand-godparents, Billy and Shirley Sheldon of York New Salem; maternal aunt, Rocketta Wolf-Franqui of York Haven; paternal uncle, Howard F. Condon, Jr.; cousins; a host of supportive and loving relatives and friends. She was preceded in death by her maternal great-grandparents, Clair E. and Edna (Hammer) Wolf; and maternal great-great-aunt, Betty Walker. There will be no viewing. Cremation will take place with Burg Funeral Home, Inc., 134 W. Broadway, Red Lion. A Service of Honor and Praise for Eirian will take place at a later date. Burial will be private and at the convenience of the family. In lieu of flowers, contributions may be offered to Children's Miracle Network, Office of University Development, Penn State Hershey Medical Center, A190, P.O. Box 855, Hershey, PA 17033-0855; or to the March of Dimes , 290 Dew Drop Road, York, PA 17403. Eirian was a very beautiful little Princess, who was quite inquisitive about everything and could light up a room with her magical personality and a smile that would melt your heart! Though she was only 2 years old, she kept Mommy and Daddy on their toes. She was incredibly strong-willed and a fighter and never knew she was sick. God has called home a PERFECT ANGEL. Corey and Rheanna would like to say "Thank-You", from the bottom of their hearts to the Tourist Inn for the benefit drive they sponsored and to the Drs. and Staff of the York Hospital, Hershey Medical Center, Life Line, Children's Hospital of Philadelphia and to Pediatric Specialty Care of Lancaster County.

Eirian Brooks Condon was carried by her guardian angels to her eternal home in God's care on Friday, June 5, at 10:40 p.m . at Hershey Medical Center at the precious age of 2. She was born in York on February 24, 2013, and is the daughter of... View Obituary & Service Information

The family of Eirian Brooks Condon created this Life Tributes page to make it easy to share your memories.

Eirian Brooks Condon was carried by her guardian angels to her...

Send flowers to the Condon family.