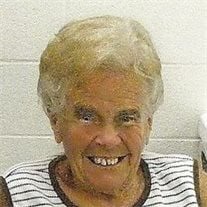 EAST PROSPECT Elizabeth "Tootie" G. (Gilbert) Regel, 89, entered into eternal life on Thursday, January 26, 2012, at 10:30 p.m. after a lengthy illness. She was the wife of Albert P. Regel, who entered into rest on June 28, 1978. She was born in East Prospect on May 30, 1922, the daughter of the late Jacob, Jr. and Mary C. (Hannigan) Gilbert. Tootie was a homemaker. She was a member of the Canadochly Valley Ambulance Association where she served as an EMT for many years, working up to the age of 87. She was a longtime and very faithful member of Zion United Methodist Church in East Prospect; Tootie never missed a day of reading her Bible. She was a very active participant in the Republican National Committee in York where she has been known to transport many friends to the polls for voting and she also assisted at the polls. She was also a member of the East Prospect Fire Company Ladies Auxiliary where she was a willing participant in all of the fundraisers for her community. Tootie is survived by a son, Mickey A. Regel and wife, Mindy Mellinger of East Prospect; a granddaughter, Nicole A. Regel of Wrightsville; one brother Edgar Burg and wife, Genny of New Bridgeville; a niece, Cindy Glatfelter of Spring Grove and a nephew, Brian Robinson of Hanover. Tootie was preceded in death by her son, Curtis J. Regel on October 29, 1994 for whom she lovingly and willingly took care of for many years. Viewing will be Tuesday from 6 to 8 p.m. at Burg Funeral Home, Inc., 134 W. Broadway, Red Lion and Wednesday, February 1, 2012, from 9 to 10 a.m. at Zion United Methodist Church, 1 N. Main St., East Prospect. The service will follow at 10 a.m. at the church, with her pastor, Rev. Albert R. Horst, officiating. Burial will be in East Prospect Riverview Cemetery. In lieu of flowers, it is the wish of the family to offer a contribution in Tootie's memory to, Zion UM Church, 1 N. Main St., East Prospect, PA 17317; or to Canadochly Valley Ambulance Association, 45 S. Main St., East Prospect, PA 17317; or to East Prospect Fire Company, P.O. Box 92, East Prospect, PA 17317. Tootie, as all of family and friends knew her, was a wonderful Mother, Grandmother, and friend to everyone. When there was an event in East Prospect, she was there. It was very important to her to be active in her community. Her family came first and she loved the times they spent together. She always put others first and their well-being ahead of her own. A dear friend is gone, but not forgotten.

The family of Elizabeth G. (Glibert) Regel created this Life Tributes page to make it easy to share your memories.