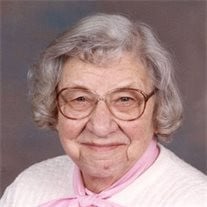 LANSDALE Elizabeth M. (Miller) Hazell, 89, formerly of Windsor, entered into rest after a lengthy illness at 1:40 p.m. Wednesday, January 19, 2011, at Dock Terrace in Lansdale. She was the wife of Thomas E. Hazell, who entered into rest April 9, 1994. Born in Nesquehoning, on April 18, 1921, she was the daughter of the late Garret and Lillian A. (Norwood) Miller. She was a seamstress at the former Held Foster Sportswear in Philadelphia and then at Tighe Industries in East Prospect, where she retired from in 1992 after 10 years of service. Mrs. Hazell was a member of Zion United Methodist Church in East Prospect since 1949, where she was involved in the United Methodist Women, was a lay member of the annual conference, a former SS teacher, and where she sang in the choir. She was also a member of AARP, Auxiliary member of the Quincy U.M. Home, and she served on the school board of Eastern High School. Surviving are three daughters, Betty A. Flohr and husband, Timothy of Windsor, Mary Jo Hazell of Hainesport, N.J., and Esther C. Kishbaugh and husband, Robert of Harleysville; two sons, Edgar "Ed" J. Hazell and wife, Becky of O'Fallon, Mo., and David L. Hazell and wife, Barbara of Peach Bottom; nine grandchildren; 10 great-grandchildren; one sister, Virginia Johnson of Pottstown; and several nieces and nephews. She was preceded in death by a brother, Norwood Miller, in 1994. The viewing will be held from 1 to 2 p.m. Saturday at Zion United Methodist Church, 1 N. Main St., East Prospect, followed by a 2 p.m. service. Her pastor, the Rev. Albert R. Horst will officiate. Burial will be in East Prospect 'Riverview' Cemetery. Burg Funeral Home, Inc., 134 W. Broadway, Red Lion, will be handling the arrangements. In lieu of flowers, contributions may be offered to Zion U.M. Church, P.O. Box 305, East Prospect, PA 17317.

LANSDALE Elizabeth M. (Miller) Hazell, 89, formerly of Windsor, entered into rest after a lengthy illness at 1:40 p.m. Wednesday, January 19, 2011, at Dock Terrace in Lansdale. She was the wife of Thomas E. Hazell, who entered into rest April... View Obituary & Service Information

The family of Elizabeth Miller Hazell created this Life Tributes page to make it easy to share your memories.

Send flowers to the Hazell family.