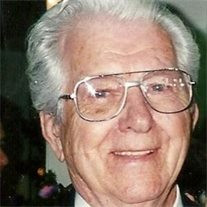 Elmer T. Ness, 95, formerly of York, entered into eternal rest at 3:30 a.m. Sunday, July 27, 2014, at Genesis Health Care Nursing Home Gettysburg Center. He was the husband of Elsie H. (Leonard) Ness, whom he married in 1939, and with whom he celebrated 59 wonderful years before she entered into rest on March 7, 1998. He was born in Springfield Twp., on April 10, 1919, and was the son of the late Robert C. and Mary E. (Strickler) Ness. Elmer spent his early years working on the family farm and then became the owner and operator of the former Elmer T. Ness Coal Business in York. He was then drafted into the military and after being honorably discharged in 1946, he became a technician for Emerson Beauty Supply, worked at ACCO for four years, and at Jerry's Food Store, retiring at the age of 75. He was a WWII Army veteran, serving in the Philippines and Japan, earning numerous medals during his career. He was a longtime and faithful member of Trinity United Methodist Church in York until its closing, and then his membership went to Fourth United Methodist Church in York. Surviving are one son, Robert E. Ness of Spring Grove and wife, Barbara A.; a daughter, Patricia Ann Ness Smith of Gettysburg and husband, Robert D.; five grandchildren, Kerri Speck, Craig Smith, Chad Smith, Steven R. Ness, and Jeffery E. Ness; eight great-grandchildren, Sarah Speck, Abigail Speck, Jonathan Speck, Soren Smith, Ronan Smith, Alexander Ness, Kathryn Ness, and Kara Ness; a brother, Robert C. Ness of York; a sister, Mildred Hull of New Oxford; a brother-in-law, Dale Snyder of York; and nieces and nephews. He was preceded in death by a brother, Wilson Ness, and a sister, Anna Snyder. There will be a viewing on Friday, August 1, from 9 to 10 a.m. at Fourth United Methodist Church, 1067 E. Market St., York. Burg Funeral Home, Inc., 134 W. Broadway, Red Lion, will be assisting the family with the arrangements. A Service of Honor and Praise for Elmer will begin at 10 a.m. on Friday at the church with his pastor, the Rev. Mitchell M. Galloway, officiating. Burial will be at Susquehanna Memorial Gardens with full military rites by the York County Veterans Honor Guard. In lieu of flowers, contributions may be offered to York County Veterans Honor Guard, c/o John M. Vecero, Jr., 670 Hammond Road, York, PA 17406; or to Fourth United Methodist Church , 20 N. Lehman St., York, PA 17403. Elmer was a wonderful Father and Grandfather. He made sure that his family's needs were always put before his own. He loved bowling, playing cards, and being outdoors, especially just sitting on his porch. He will be sadly missed by everyone who knew and loved him. Online condolences may be offered at www.BurgFuneralHome.com

Elmer T. Ness, 95, formerly of York, entered into eternal rest at 3:30 a.m. Sunday, July 27, 2014, at Genesis Health Care Nursing Home Gettysburg Center. He was the husband of Elsie H. (Leonard) Ness, whom he married in 1939, and with whom he... View Obituary & Service Information

The family of Elmer T. Ness created this Life Tributes page to make it easy to share your memories.