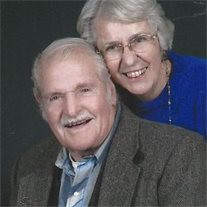 Elmer C. Sueck, passed away on Wednesday, June 14th at 10:10 am at York Hospital with family by his side at the age of 86. He was the loving husband of Patricia A. (Higgins) Sueck of Airville, whom he married on July 14, 1956 celebrating 61 years of marriage together. He was born in Baltimore, MD on June 7, 1931 and was the son of the late Adolph and Elise (Pferdekamper) Suek. He began working with the family business at the age of 8, and became a skilled stone, block and brick mason. He served his country in the United States Army during the Korean War, in the Sherman Tank Company. Farming was always in his heart, so he and Patricia bought a farm in Ariville in 1969. It was their dream come true. He was never so happy as when he was with his livestock or on a tractor. He was a member of the Farm Bureau and Farmers Forum. Kennardale Young Farmers and the American Legion Post #543 in Red Lion and a member of the Church of the Great Outdoors. Patricia and Elmer raised Pat's two half-brothers, Tommy Higgins of TN and the late Larry Higgins. Together they had five children of their own. Michael P. Sueck of Airville and his lifelong companion Maura, David A. Sueck of Airville and his wife Michelle, Sandy L. Washington of York and her husband Ed and Karen P. Gerrick of Littlestown and her husband Don. He was preceded in death by his son, Elmer, C. Sueck, Jr in 1979. He has eight grandchildren and five great grandchildren along with numerous nieces and nephews. He was also preceded by his 4 siblings, Emil, Walter, Junior and Elsie. Viewings for Elmer will be on Saturday, June 17th, from 2-4 pm and 6-8 pm and Sunday, June 18th from 12-1 pm at Burg Funeral Home, Inc., 134 W. Broadway, Red Lion. A Service of Honor and Praise for Elmer will begin at 1 pm on Sunday at the funeral home with Deacon Dan Bernardy officiating. Full military rites will be offered by the York County Veterans Honor Guard. Cremation will follow the service with burial at the convenience of the family. The family has requested for those attending the viewings and or service to please come in casual attire as Dad (Elmer) hated to dress up or wear a suit. In lieu of flowers, contributions may be offered to the York County 4-H Club, c/o the Endownment Fund, at Extension Office, 112 Pleasant Acres Road, York, PA. 17402. A special and heartfelt thank you is offered to the great staff at York Hospital Trauma ICU and to all our family and friends for their loving support during this difficult time. Dad died as his lived, doing what he loved. He is now in the great hayfield in the sky with no weeds. He is fondly remembered as a very kind and good man who was firm but fair to everyone. He was grea less and very generous and a good neighbor. Perhaps my time seemed all to brief. Don't lengthen it now with undue grief. Lift up you heart and share with me. God wanted me now, He set me free.

Elmer C. Sueck, passed away on Wednesday, June 14th at 10:10 am at York Hospital with family by his side at the age of 86. He was the loving husband of Patricia A. (Higgins) Sueck of Airville, whom he married on July 14, 1956 celebrating 61... View Obituary & Service Information

The family of Elmer C. Sueck created this Life Tributes page to make it easy to share your memories.

Send flowers to the Sueck family.