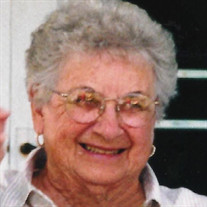 Elsie M. (Reustle) Hallas, formerly of Red Lion, entered into rest on Monday, July 6, 2020, at 6:28 am at Pleasant Acres Nursing and Rehabilitation Center, at the age of 99. She was the wife of the late Edward J. Hallas, Jr., who entered into rest on October 15, 2011. Elsie was a Wave, serving in the Navy in 1942, where she met Edward and they married on August 31, 1943 in Wenachee, Washington with both wearing their military dress uniforms. She was born in Philadelphia, on June 12, 1921 and was the daughter of the late Waldo and Eva (Scheidt) Reustle. She graduated from Overbrook High School Class of 1939 in Philadelphia, prior to enlisting in the Navy. After her time in the service, Elsie was a homemaker. She was a member of the Holy Cross Episcopal Church in Street, Maryland. Elsie’s family was especially important to her. She leaves her two daughters, Nancy L. Morgan and her husband Robert E. of Felton, and Cynthia L. Davis and her husband Thomas of Florida. She was the loving grandmother of Christine Miller and her husband Brad of Red Lion, Carin Kreiss and her husband Douglas of Stewartstown, Catherine Grein and her husband Kent of Felton, Michael Davis and his wife Melissaof Perkasie, PA, and Daniel Davis. Elsie was great grandmother to Deacon, Grayson and Elena Davis, Dalton and Austin Miller, Emma and Lillian Kreiss, Kolton and Cora Grein, and Kayla Iwaskiw; as well as great great grandmother of Narah Iwaskiw. She also has nieces and nephews and was preceded in death by her three siblings. Services and burial will be private and at the convenience to the family, with her pastor, Rev. Marta D.V. Johnson officiating. Burg Funeral Home, Inc., 134 W. Broadway, Red Lion is assisting the family with the arrangements. The York County Veterans Honor Guard will acknowledge her as a United States Navy Veteran. Burial will take place at Susquehanna Memorial Gardens at the convenience of the family. In lieu of flowers, contributions in memory of Elsie may be offered to: Holy Cross Episcopal Church, PO Box 103, Street, MD 21154.

Elsie M. (Reustle) Hallas, formerly of Red Lion, entered into rest on Monday, July 6, 2020, at 6:28 am at Pleasant Acres Nursing and Rehabilitation Center, at the age of 99. She was the wife of the late Edward J. Hallas, Jr., who entered into... View Obituary & Service Information

The family of Elsie M. (Reustle) Hallas created this Life Tributes page to make it easy to share your memories.

Send flowers to the Hallas family.