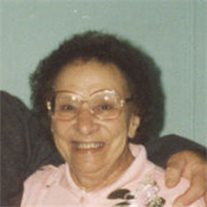 Emily A. Strawbridge YORK Emily A. Strawbridge, 90, passed away peacefully on Friday, August 20, 2010, after a long, courageous battle with Alzheimer's at Pleasant Acres Nursing Home. She resided at Pleasant Acres since August of 2005, and had previously resided at Regency Manor Assisted Living in Hellam for several years. Emily was the loving, devoted wife of the late Hugh E. Strawbridge and the late Robert (Charlie) Brenneman. A funeral service in celebration of Emily's life will be held at 10 a.m. on Wednesday at Burg Funeral Home, 134 W. Broadway, Red Lion, with the Rev. Logan Garth Swanger, O.S.L., of the Winterstown United Methodist Church, officiating. Viewing will be 9 to 10 a.m. at the funeral home prior to the service. Interment will immediately follow the service at Winterstown UB Cemetery. The family request casual, conformable attire for those attending. Emily was born on December 29, 1919, the daughter of the late Martin S. and Grace E. (Miller) Grove. Emily was raised by her mother's parents, the late John W. and Catherine M. (Warner) Miller, after her mother died when Emily was still a child. Emily’s grandparents raised her to be a loving, kind, wonderful women who always helped others in need however she could. She worked at the former G.C. Murphy's 5 & 10 in Red Lion, and was Assistant Manager when her husband, Hugh, was taken ill by a stroke in 1964. Even though the stroke took most of his speech and left his right side paralyzed, she faithfully took care of him and tended to his every need until his death in 1979, in Fort Pierce, Fla. For several years, they had wintered in Fort Pierce, returning to Pennsylvania in the spring. they then moved to Florida in the early 70’s before Hugh’s death because it allowed him more freedom outside on his motorized wheelchair and the weather was better for his health. Emily managed the White Caps Efficiency Apartments and later the Coconut Cove Efficiency Apartments, all the while taking care of her disabled husband. After his death, she remained living in Florida until 1989. She moved back to Pennsylvania due to health problems, moved in with her daughter and became friends with the neighbor, Robert (Charlie) and Betty Brenneman. She would often stay with Betty while Charlie would run errands. After Betty passed way in 1993, Emily and Charlie continued the companionship and married in 1994. She showed Charlie the same love and devotion she gave her husband, Hugh, until Charlie's death in 1999. Emily’s family was the most important thing to her and was always put first. She loved digging in the soil and planting new things. She could take a ‘snip’ off of any plant and get it to grow. She loved and cared for animals of all kinds, often bringing home sick canaries, baby chicks, baby rabbits, and such from the 5 & 10 when she worked there. She would nurture wild animals, such as baby birds, baby wild rabbits (that the family dog would bring home), or even chipmunks that ended up abandoned in the yard, until they were able to be released back to where they belonged. Emily was deeply loved and will be greatly missed by three sons, Terry L. Strawbridge and wife, Faye of Red Lion, Wayne J. Strawbridge and friend, Grace of York, and Ricky L. Strawbridge of Harrisburg; a daughter, Veda L. Reider and husband, Dennis of Felton; eight grandchildren; three step grandchildren; 14 great-grandchildren; 10 step great-grandchildren. She is also survived by a stepmother, Gladys V. (Silk) Grove of Manor Care Dallastown; two half brothers, Robert C. Grove and wife, Wilhemina of Felton and James Grove and companion, Phyllis of York; a half sister, Betty A. Orwig of Stewartstown; two sisters-in-law, Gladys L. Grove of York and Lillian M. Grove of East Waterford; and numerous nieces, nephews, cousins, and friends. Emily was preceded in death by three brothers, Miller S. (Bud) Grove, Martin C. (Junior) Grove, and George M. Grove; and a half brother, William Grove. In lieu of flowers, contributions in Emily’s name may be made to the Alzheimer's Association Greater Pennsylvania Chapter, P.O. Box 96011, Washington, D.C. 20090-6011.

The family of Emily A. Strawbridge created this Life Tributes page to make it easy to share your memories.

Send flowers to the Strawbridge family.