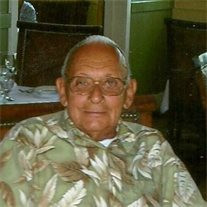 Emory C. "Druckie" Druck, 76, entered into rest after a lengthy illness at 11:20 a.m. Monday, August 6, 2012, at his residence. He was the husband of Cynthia R. (Pickel) Druck, whom he married on December 15, 1972. The couple celebrated 40 years together. He was also the husband of Fern P. (Ellis) Druck, who entered into rest May 1968. Mr. Druck was born in Chancefored Twp., on August 13, 1935, and was the son of the late Sterling and Carrie M. (Craley) Druck He was a farmer and a truck driver for the former Kline's Quarry, retiring in 1997 after 28 years of service. He attended Bethel U.M. Church and was a member of the New Bridgeville Fire Company. In addition to his wife, Cynthia, he is survived by one son, Ronald E. Druck of Red Lion; two grandchildren, RaeGina Fogle of Red Lion and Robert L.S. Druck of Red Lion; four great- grandchildren, Hailee R. Fogle, Chyenne Fogle, Ashlyn Waples, and Saige Druck; and his beloved cat Snickers. There will be a viewing from 6 to 8 p.m. Sunday, August 12, and from 9 to 10 a.m. Monday, August 13, at Burg Funeral Home, Inc., 134 W. Broadway, Red Lion. The service will begin at 10 a.m. Monday at the funeral home with with the Rev. Peter M. Beddia, pastor of Bethel U.M. Church, officiating. Burial will be at St. Luke Lutheran Cemetery. In lieu of flowers, contributions may be offered to Bethel U.M. Church, 1674 Funace Road, Brogue, PA 17309; or to New Bridgeville Fire Company, 2870 Furnace Road, Red Lion, PA 17356. Emory was a hard worker who loved to farm and enjoyed riding his Trike motorcycle and in his 1953 Buick. His family was very important to him and they will miss him greatly, as will all who knew him. Online condolences may be offered at www.BurgFuneralHome.com

The family of Emory Druck created this Life Tributes page to make it easy to share your memories.

Emory C. &quot;Druckie&quot; Druck, 76, entered into rest after a lengthy...

Send flowers to the Druck family.