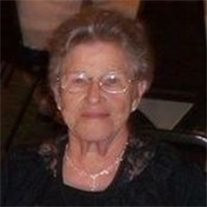 Esther A. (Snyder) Knisely, formerly of Felton, entered into God's eternal home on Monday, Sept. 21, 2015, at 3:42 p.m. at Manor Care Dallastown at the age of 97. She was the wife of the late Charles E. Knisely, Sr., who entered into rest on July 8, 1974. Esther was born in Windsor Twp. on July 17, 1918, and was the daughter of the late Charles E. and Sarah (Blymire) Snyder. Esther worked in her earlier years at the former Wolf Cigar Company in Red Lion as a cigar maker, but she was a homemaker taking care of her family and babysitting for others. She attended Chanceford Alliance Church in Felton. Surviving her are six children, Janet L. Godfrey Smith and husband Terry of Yorkanna, Katharine R. Baker and her companion Jesse Ruth of Red Lion, Jesse D. Knisely of Bel Air, Md., Sarah I.S. Knisely and husband Edward of York, Charles E. Knisely, Jr. and wife Jeannine of Felton and Terry L. Knisely and wife Nancy of Dallastown13 grandchildren; 29 great grandchildren; 3 great- great grandchildren and expecting baby, Hannah on Friday; numerous nieces and nephews. She was preceded in death by a daughter – Louise Mae Knisely whom entered into rest on Dec. 11, 2005; a great- great granddaughter Abigail Robinson; 5 sisters and 5 brothers. Viewings will be held Friday, Sept. 25 from 7 to 9 p.m. and Saturday, Sept. 26 from 1 to 2 p.m. at Burg Funeral Home, Inc., 134 W. Broadway, Red Lion. Service of Honor and Praise for Esther will begin at 2 p.m. at the funeral home. The Rev. Steven A. Schmuck, pastor of Red Lion Bible Church, will officiate. Burial will be in Bethel United Methodist Cemetery. In lieu of flowers, contributions may be offered to Heartland Hospice, 3417 Concord Road, Suite C, York, PA 17402. Esther was a very loving and compassionate Mother. She loved to cook and made sure that anyone who came to visit her never left her house hungry - their bellies were always full. She always put her family's needs before her own. Esther loved flowers, especially her roses. www.BurgFuneralHome.com

Esther A. (Snyder) Knisely, formerly of Felton, entered into God's eternal home on Monday, Sept. 21, 2015, at 3:42 p.m. at Manor Care Dallastown at the age of 97. She was the wife of the late Charles E. Knisely, Sr., who entered into rest on... View Obituary & Service Information

The family of Esther A. (Snyder) Knisely created this Life Tributes page to make it easy to share your memories.

Esther A. (Snyder) Knisely, formerly of Felton, entered into...