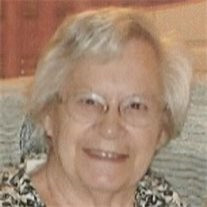 Ethel L. (Frey) Bankert, 79, entered into rest after a brief illness at 5:45 p.m. Thursday, March 14, 2013, at York Hospital. She was the wife of Burnell S. Bankert, who entered into rest on December 4, 2010. She was born in Red Lion, on May 28, 1933, and was the daughter of the late Clarence and Estella (Eberly) Frey. Ethel was a homemaker. She was a member of Bethlehem United Methodist Church in Dallastown for 15 years. She enjoyed playing piano, cooking, crochet and knitting, and she loved flowers. Surviving are two sons, Thomas R. Witmer and his wife, Lois of Knoxville, Tenn., and Walter E. Witmer and his wife, Colleen of Plano, Texas; a daughter, Susan M. Basile and her husband, Gregg of York; seven grandchildren; five great-grandchildren; and a brother, Eugene Frey of Dallastown. She was preceded in death by a son, David L. Witmer, in July 2002. There will be a viewing from 6 to 7 p.m. Tuesday, March 19, at Burg Funeral Home, Inc., 134 W. Broadway, Red Lion, followed by a 7 p.m. service. Her pastors, the Rev. Roger H. Mentzer and Dr. Carl B. Rife, will officiate. Burial will be at Dallastown Union Cemetery at the convenience of the family. In lieu of flowers, contributions may be offered to a favorite charity of your choice. Online condolences may be offered at www.BurgFuneralHome.com .

The family of Ethel L. (Frey) Bankert created this Life Tributes page to make it easy to share your memories.