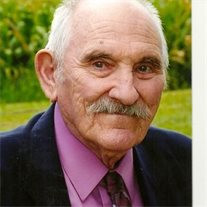 Eugene K. "Doc" Wolfe, 76, entered into rest after a lengthy illness on Sunday, December 9, 2012, at 8 a.m. at his residence. He was the husband of Mary M. (Stiffler) Wolfe, whom he married on May 19, 1956. Born in Chanceford Twp., on September 5, 1936, he was the son of the late Curvin F. and Lillian G. (Hall) Wolfe. He worked in the Shipping Dept at Osram Sylvania in York retiring in 1999 after 21 years of service and he was a truck driver for many years. Eugene was a lifetime member of Guinston Presbyterian Church. In addition to his wife, Mary of Felton, he is survived by a son, Wayne E. Wolfe of Felton and his wife, Melody; three grandchildren, Kerri Myers (Adam Spangler) of Wrightsville, Jonathan Shoff (Amy) of Chambersburg, and Jessica Zeigler (Bradley) of Felton; five great-grandchildren, Nathan, Kelsey, Cloe, Thomas and Lilia; brother, Robert L. Wolfe (Beverly) of Felton; two sisters-in law, Joyce Wolfe of Collinsville and Bonnie Martz, of Mesa Ariz; and numerous nieces and nephews. He was preceded in death by two brothers, Charles L. Wolfe and Harold C. Wolfe. Viewings will be Wednesday from 6 to 8 p.m. and Thursday from 9 to 10 a.m. at Burg Funeral Home, Inc., 134 W. Broadway, Red Lion. The service will be Thurs at 10 a.m. at the funeral home, with his pastor, the Rev. Daniel R. Moore, officiating. Burial will be in Round Hill Cemetery. In lieu of flowers, contributions may be offered to:Guinston Presbyterian Church, " Building Fund", 14130 Guinston Forge Road, Airville, PA 17302. Doc was a wonderful husband to Mary for 46 years and a great father and grandfather. He loved Blue Grass Music and camping, but most of all, he loved being with his family and especially spending time with his grandchildren, playing Domino's and Aggravation (Marbles).

The family of Eugene K. "Doc" Wolfe created this Life Tributes page to make it easy to share your memories.