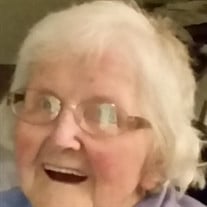 Evelyn L. (Weaver) Tressler, of Ocala, Florida, went to her Eternal Home on Sunday, August 8, 2021 at the age of 99. She was the husband of the late James T. Tressler who entered into rest on November 20, 1991 and with whom she shared 50 years of marriage. Evelyn was born on December 29, 1921 in Cairnbrook, PA and was the daughter of the late Oliver E. and Florence P. (Gordon) Weaver. She was a homemaker and also worked for Shaffer Florists as well as House of Windsor where she ended up retiring from after 10 years of service. Evelyn was a member of the former Rainbow Chapter Order of the Eastern Star #517 and enjoyed camping, crafting, traveling, gardening and shopping. She was a member of the Emmanuel Lutheran Church in Freysville. She is survived by her son, James Tressler and wife, Drada, of Red Lion and sister, Lois Adams and husband, Tim, of Acworth, GA. She is also survived by her eight grandchildren, Marsha Gladfelter and husband, David, of Red Lion, Mark Tressler and wife, Chrissy, of Orbasonia, PA, Marcee Graves and husband, Cleo, of Jacksonville, FL, Monte Tressler and wife, Linda, of Dallastown, Jamie Fink of York, Jada A. Weaver of York, Travern Adams and wife, Heather, and Travis Adams and wife, Catie Lyn, both of Acworth, GA. Evelyn also leaves behind her 16 great grandchildren, 3 great great grandchildren, brother, Dwight Weaver and wife, Nan, of Johnstown and sister, Roena Luttrell of Lancaster as well as her daughter in law, Kay Tressler of Robertsdale, PA. She was preceded in death by her son, Richard Tressler as well as her four siblings. Services and burial will be private and at the convenience of the family. Burg Funeral Home, Inc., 134 W. Broadway, Red Lion is assisting the family with arrangements. Contributions may be offered to Alzheimer’s Association: 225 N. Michigan Ave., Fl. 17, Chicago, IL 60601

Evelyn L. (Weaver) Tressler, of Ocala, Florida, went to her Eternal Home on Sunday, August 8, 2021 at the age of 99. She was the husband of the late James T. Tressler who entered into rest on November 20, 1991 and with whom she shared 50 years... View Obituary & Service Information

The family of Evelyn L. Weaver Tressler created this Life Tributes page to make it easy to share your memories.

Send flowers to the Tressler family.