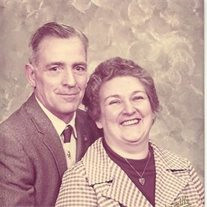 Evelyn May (Swartz) Frey of Red Lion entered into eternal rest on Tuesday, October 1, at 2:15 p.m. at Manor Care Dallas-town at the age of 82. She was the wife of the late Paul L. Frey who entered into rest on November 24, 2001. She was born in Springfield Twp. on October 16, 1930. She was the daughter of the late Harry L. and Rebecca Emma (Eveler) Swartz. Evelyn was a homemaker. She attended Salem United Methodist Church in Martinsville. She is survived by three daughters, Connie D. Collins and husband Glenwood of Felton, Linda S. Noll and husband Stephen of Windsor, and Mary Ann Baker and husband Timothy of Thomasville; five grandchildren, John, Michael, Tammy, Chad, and Brian; eight great-grandchildren; one great -great grandson; three sisters, Virginia Sprenkle of Yoe, Gloria Haugh of Mechanicsburg, and Shirley Holtzinger of Bittersville; and numerous nieces and nephews. She was preceded in death by two brothers, Henry and George Swartz, and a sister, Daisy Rexroth. There will be a viewing on Sunday, October 6, from 7 to 9 p.m. and Monday, October 7, from 9 to 10 a.m. at Burg Funeral Home, Inc., 134 W. Broadway, Red Lion. A Service of Honor and Praise for Evelyn will begin on Monday at 10 a.m. at the funeral home. Pastor Chris Starr of Mt. Zion Baptist Church will officiate. Burial will be in St. Luke Lutheran Cemetery. In lieu of flowers, contributions may be offered to American Heart Association , 140 Roosevelt Avenue, Suite 208, York PA 17401; or to American Diabetes Association , 3544 N. Progress Avenue Suite 202, Harrisburg, PA 17110. Evelyn enjoyed going to public sales, making soap, canning, gardening, cooking, and baking. She adored her three cats, Tommy, Puddin, and Mama. She was a wonderful mother and grandmother who always put her family first. The family would like to extend a very special thank you to Bev and Butch Robinson for always being there for Evelyn in her time of need and also to Manor Care Dallastown for the help provided to them during their mother's stay there and her passing. Thank you Mom for all the great memories that we will cherish forever, with love, Connie, Linda and Mary Ann. Online condolences may be offered at www.BurgFuneralHome.com . Published in York Daily Record & York Dispatch on October 4, 2013 Print | View Guest Book - See more at: http://www.legacy.com/obituaries/york/obituary.aspx?pid=167321233#fbLoggedOut

Evelyn May (Swartz) Frey of Red Lion entered into eternal rest on Tuesday, October 1, at 2:15 p.m. at Manor Care Dallas-town at the age of 82. She was the wife of the late Paul L. Frey who entered into rest on November 24, 2001. She was born... View Obituary & Service Information

The family of Evelyn May (Swartz) Frey created this Life Tributes page to make it easy to share your memories.