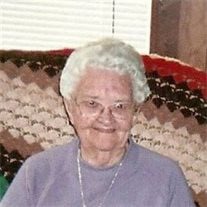 Evelyn M. (Warner) Livingston, 94, entered into eternal rest at 3:45 a.m. Thursday, October 3, 2013, at her residence after a brief illness. She was the wife of R. Dale Druck, who entered into rest March 15, 1995, and Wibert A. Livingston, who entered into rest August 26, 1983. She was born in Chanceford Twp., on June 8, 1919, and was the daughter of the late Frank P. and Naomi (Runkle) Warner. Evelyn was a cigar maker, having worked for the former York Federal Cigar Company in Red Lion and for The House of Windsor Cigar Company, from where she retired after 30+ years of service. She also worked at Mack's Ice Cream in Spry. Evelyn was a long time and very active member of Druck Valley Presbyterian Church in York, and she attended New Harmony Presbyterian Church in Airville. Surviving are a son, Robert E. Druck of Brogue and his companion, Wanda Tyson of Red Lion; two grandsons, Todd E. Druck of Red Lion and wife, Bonnie, and Troy L. Druck of Brogue; four great-grandchildren, Tyler B. and Lauren E. Druck, and Jennifer and Christine Druck; three great-great-grandchildren, Devon, Amerah, and McKenzie; a stepdaughter, Rita Larkin of California; three stepgrandchildren, Greg, Rodney, and Mark; two brothers, A. Bruce Warner and Frank R. Warner, both of Brogue; a sister, Betty Trout and husband, Leon of Brogue; a sister-in-law, Hazel Warner of Brogue; and several nieces and nephews. She was preceded in death by an infant daughter, June Louise, in 1937; a stepson, Maynard and wife, Gwen Livingston; a daughter-in-law, Delores W. Druck in 2009; a sister, Alma Morton; a brother, Dennis Warner; and a great-great-grandson, Saumir Heyward, in 2013. There will be a viewing from 1 to 2 p.m. Monday, October 7, at Burg Funeral Home, Inc., 134 W. Broadway, Red Lion. A Service of Honor and Praise for Evelyn will begin on Monday at 2 p.m. at the funeral home, with the Rev. Guy W. Dunham, pastor of Chanceford Presbyterian Church in Airville, officiating. Burial will be at Pine Grove U.M. Cemetery near Leader Heights. In lieu of flowers, contributions may be offered to Hospice and Community Care, 685 Good Drive, P.O. Box 4125, Lancaster, PA, 17604. Evelyn was a wonderful Mother and Grandmother. She worked hard and would do any job she was offered to raise her son. She was a wonderful cook who made the best sugar cakes and coconut cream pie ever!!!!. Her family and her faith were very important to her. She will be greatly missed by all who knew and loved her. Online condolences may be offered at www.BurgFuneralHome.com.

The family of Evelyn M. (Warner) Livingston created this Life Tributes page to make it easy to share your memories.