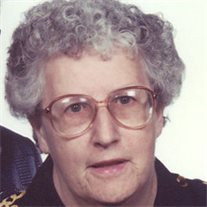 Faye Arlene (Geist) Braner, 80, entered into rest after a brief illness on Monday, July 26, 2010, at 1:25 a.m. at York Hospital. She was the wife of Frederick E. Braner, who entered into rest on December 12, 2001. Born in York on November 16, 1929, she was the daughter of the late Charles and Dorothy (Schiding) Geist. She was a homemaker, member of the Good Shephard Lutheran Church, Kreutz Creek Valley VFW Post 7045 Ladies Auxillary, and the Liberty Club. Faye was and avid Nascar and Phillies Fan. She is survived by one son, Fritz Braner and wife, Cheryl of York; two daughters, Judy Heiss and husband, Dayne of York and Theresa A. Braner of York; eight grandchildren, Elizabeth, Amanda, Tyler, Erin, Melissa, Gene, Jennifer and Michael; nine great-grandchildren; two brothers, Donald Geist of Red Lion and Richard Geist and wife, Nancy of West York; one sister, Norma Heiland of Dillsburg; and her favorite beloved granddogs, Golden Retrievers, Parker and Eli. She was preceded in death by her husband; and a brother, Robert Geist. Viewing will be Wednesday from 9 to 10 a.m. at Burg Funeral Home, Inc., 134 W. Broadway, Red Lion. The service will follow Wednesday at 10 a.m. at the funeral home with the Rev. Logan G. Swanger, pastor of Winterstown United Methodist Church in Felton, officiating. Burial will be at Machpelah Cemetery Contributions may be offered to York County Honor Guard, c/o: John M. Vecero Jr., 670 Hammond Road, York, PA 17406. It is the request of the family that all friends and relatives attending the service please come dressed in casual and comfortable attire.

The family of Faye Arlene (Geist) Braner created this Life Tributes page to make it easy to share your memories.

Faye Arlene (Geist) Braner, 80, entered into rest after a brief...