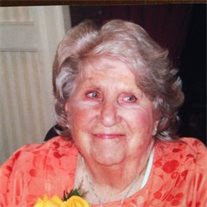 Fern V. (Eschbach) Wolf passed away on Thurs., Jan 8, 2015, at 2:20 p.m. at Pleasant Acres Nursing Home at the age of 95. She was the wife of the late Erle S. Schultz, who passed away on Jan. 31, 1945, and the late Milton R. Wolf, who passed away on Aug. 15, 1995. Fern was born in Palm, Pa. on July 31, 1919, and was the daughter of the late Frederick C. and Estella (Graber) Eschbach. Fern worked in the Accounts Payable Department of the former McCrory Stores Home Office in York from 1965 until her retirement in 1983. Prior to that, she was employed by Rodale Publishing Company in Emmaus, from 1957 to 1964. She was a longtime member of Zion United Church of Christ in York, where she sang in the choir and was a member of the Consistory and a former member of Palm Schwenkfelder Church in Montgomery County. Fern was an accomplished pianist and organist and she shared her talents by playing for several local churches over the years. She sang and played for numerous local choruses throughout York, authored her autobiography, and compiled an anthology of Patriotic Songs for all 50 states. Survivors include three children, Mona E. Schultz Chylack of Royersford, Lane D. Schultz (Sandra) of Middletown, and Glenn F. Wolf (Jeannie) of Red Lion; five grandchildren, Jolie Chylack Wenger, Amey Fooks, Priscilla Schultz, Karla Wolf and Suzanne Boltersdorf; nine great-grandchildren, Catherine, Jeremy, twins Leo and Christian Wenger, Daniel, Matthew and Owen Fooks, Collin Koicuba, Addison Fern Schram; two sisters, Marie Bauman of Allentown and Anna DeFrees of Port Charlotte, Fla.; nieces and nephews. She was preceded in death by her son-in-law, Jeremy Peters Chylack, and a brother and three sisters. There will be no viewing. Visitation will be on Wed., Jan. 14 from 9:30 to 10 a.m. at Zion United Church of Christ, 100 Lafayette St. , York, and from 1:30 to 2 p.m. at Palm Schwenkfelder Church, 833 Gravel Pike, Palm, Pa. Burg Funeral Home, Inc., 134 W. Broadway, Red Lion, will be assisting the family with the arrangements. A Service of Honor and Praise for Fern will be Wed. at 10 a.m. at Zion UCC in York, followed by a service at 2 p.m. at Palm Schwenkfelder Church in Palm, Pa. Her pastor, the Rev. Lin Carlson will officiate in York, assisted by the Rev. Nick Pence officiating in Palm, Pa. Burial will follow the 2 p.m. service in Palm Schwenkfelder Church Cemetery. In lieu of flowers, contributions may be offered to Zion United Church of Christ, 100 Lafayette St., York, PA 17401; or to Palm Schwenkfelder Church, 833 Gravel Pike, Palm, PA 18070. Fern was a wonderful mother and grandmother. Her granddaughters adored her. She loved to bake and was very active with walking, yoga and aerobics. Exercise was important to her and she enjoyed being outdoors. Her family was always top priority to her and they came first in her life. She will be greatly missed by all who knew and loved her. Online condolences may be offered at www.BurgFuneralHome.com

The family of Fern V. (Eschbach) Wolf created this Life Tributes page to make it easy to share your memories.