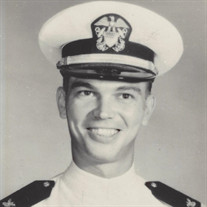 Ferness L. “Lee” Rittenhouse entered into rest unexpectedly on Saturday, October 5, 2019 at 4:28 AM, at WellSpan York Hospital at the age of 83. Lee was born August 5, 1936 in Red Lion, PA and was the son of the late Rev. H. B. Rittenhouse and Gladys (Krewson) Rittenhouse Markel. Lee served In the United States Navy from August 25, 1954 to May 31, 1975, being commissioned as Ensign on February 9, 1962 and promoted to the rank of Lieutenant Commander on November 1, 1969. Lee was an avid Dodgers and Penn State fan throughout his life. He is survived by his three children: Amy Rittenhouse and her son, Daryk Gunderson, Zion, IL; Sheryl Lupo and her son Kevin and daughter Kristy, Zion, IL ; Don Rittenhouse and his daughters Amanda Mangano and Michelle Bolke, and significant other Kathryn McIntyre and her daughter Jenna Hoffman, Antioch, IL. Lee also is survived by three stepchildren by marriage to Patricia R. Wallace Rittenhouse who predeceased him by 1 year: Russ Burke, wife Cheryl, and daughter Chelsea and son Grant; Kitty Wilkin, with husband John and daughter Kari; and Shane Burke, wife Karen with son Kane. Lee is also survived by three siblings: Vernon, wife Jane, Rittenhouse of Reedsville, PA; Kathryn Farrell, husband Lou, of Vero Beach, FL; and James, wife Bev, Rittenhouse of Punta Gorda, FL, along with numerous nieces and nephews. There will be no viewing. A Military Graveside Service will be held on Friday, November 1, 2019, at 9:00 AM at the Indiantown Gap National Cemetery near Annville, PA, with Navy Chaplin William Mcellroy officiating. If you are attending the service, please arrive around 8:45 am, to line up at the cemetery. Burg Funeral Home, Inc., 134 W. Broadway is assisting the family with the arrangements. In lieu of flowers, please consider a donation in Lee’s name to the Wounded Warrior Project, P.O. Box 758516, Topeka, Kansas 66675-8516.

The family of Ferness Levere Rittenhouse created this Life Tributes page to make it easy to share your memories.

Send flowers to the Rittenhouse family.