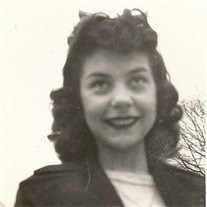 Florence M. (Phillips) Thomassen, of Stewartstown, PA, entered into eternal rest on Wednesday, Oct. 21, 2015 at Manor Care Ruxton at the age of 88. She was the wife of the late Erwin A. Thomassen whom entered into eternal rest on Feb. 17, 1996. Florence was born in Baltimore, MD on December 18, 1926 and was the daughter of the late Joseph C. and Jenny (Johns) Phillips. Florence was a dancer and was featured on the Arthur Murray television show. She enjoyed teaching dance lessons from her own studio. Florence worked at Luncheon Is Served for many years as a regional manager in Baltimore, MD, where she helped to fundraise through catering. In 1976, she was named Rookie of the year for outstanding performance, Eastern Market Consumer of the year in 1977 and in 1979 she was named Public Relations Representative of the year. Surviving are a son -Lee A. Thomassen and wife, Janet L. Winters of Stewartstown; a daughter - Lori K. Curley and fiancé, David L. Harman of Laurel, MD; 3 grandchildren- Ian A. W. and Sarah M. W. Thomassen of Taipei Taiwan and Miranda L. W. Thomassen of Stewartstown; and a niece – Judith Hutton of Houston, TX. There will be no viewing. Cremation will take place with Burg Funeral Home, Inc., 134 W. Broadway, Red Lion. There will be a memorial gathering from 3:00 – 7:00 on Thursday October 29 at the Lemmon Funeral Home at 10 W. Padonia Rd in Timonium. There will be a visitation from 10:00 – 11:00 AM on Saturday Nov 21 at Stewartstown Presbyterian Church followed by a memorial service officiated by Pastor Andrew Wirt. Burial will be private and at the convenience of the family at a later date. She was a loving mother and will be dearly missed by all. Online condolences may be offered at: BurgFuneralHome.com

The family of Florence M. (Phillips) Thomassen created this Life Tributes page to make it easy to share your memories.