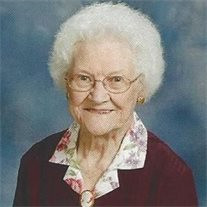 Frances "Fran" L. (Lutz) Krouse, formerly of Springvale, entered into God's eternal care on Thursday, June 16th, at 4:37 pm at Dallastown Nursing Center at the age of 92. She was the loving wife of the late Lester V. Krouse who entered into rest on November 7, 1999. Fran was born in Springvale on April 17, 1924 and was the daughter of the late Curvin and Edna (Williams) Lutz. She attended Red Lion High School and had worked at the former H.L. Neff & Company Cigar factory in Red Lion. Fran was a homemaker and a longtime member of Springvale United Methodist Church, where she was a former Sunday School Teacher, Choir Member and Nursery Director. Her church was very important to her and she would volunteer wherever and whenever needed. Fran is survived by her two sons, William V. Krouse and his wife Judy and Randy K. Krouse and his wife Lori all of Red Lion. Four grandchildren, Shelly Orwig and husband Don and Billie Shue and husband Mark all of Red Lion, Adam Krouse and wife Jennifer of Lancaster and Lindsey Krouse and her Fiance' Michael Troyanoski of Media. Three great grandchildren, Hailey and Gillian Orwig and Alec Shue all of Red Lion. She also has several Brother and Sister in law and nieces and nephews to cherish her memory. She was preceded in death by a son Timothy Krouse, two sisters, Viola Hartwell and Esther Lutz and a brother, William Lutz. A service of Honor and Praise for Fran will be on Sunday, June 26th at 5:30 pm at Springvale United Methodist Church, 265 Circle Drive, Red Lion with her pastor, Rev. Thomas R. Osenbach officiating. Viewings will be on Saturday, June 25th from 6-8 pm at Burg Funeral Home, Inc., 134 W. Broadway, Red Lion and also on Sunday, from 4:30 to 5:30 pm at the church. Burial will be private and take place at Zion UM Cemetery on the Felton Road at the convenience of the family. In lieu of flowers, memorial contributions may be offered to Springvale United Methodist Church, 265 Circle Drive, Red Lion, PA 17356 or the Gideon's International, PO Box 51, Red Lion, PA 17356. Frances was a wonderful Mother and Grandmother who was still able to do a cartwheel at age 70. She loved to laugh, travel, spending time with family and playing games with her grandchildren. She was an example of a good Christian who's love for the Lord was reflected throughout her life. Fran was overflowing with unconditional love that she shared with everyone she met and was a friend to all who knew and loved her. The family would like to extend a very special thank you to Rev. Thomas Osenbach, Alissa Stump and the entire staff of the Dallastown Villa and Dallastown Nursing Center for all the care given to Fran and the compassion shown to them during this difficult time. www.BurgFuneralHome.com

Frances "Fran" L. (Lutz) Krouse, formerly of Springvale, entered into God's eternal care on Thursday, June 16th, at 4:37 pm at Dallastown Nursing Center at the age of 92. She was the loving wife of the late Lester V. Krouse who entered into... View Obituary & Service Information

The family of Frances "Fran" L. (Lutz) Krouse created this Life Tributes page to make it easy to share your memories.