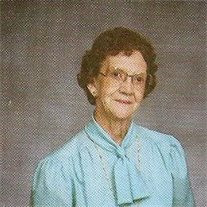 Freda E. (Saylor) Lutz, formerly of Stewartstown, entered into eternal rest after a brief illness on Friday, Oct. 4, at 3:50 p.m., surrounded by her loving family at Barbara J. Eagan Nursing and Rehabilitation Center in Shrewsbury, at the age of 96. Mrs. Lutz was the wife of the late Ross A. "Dick" Lutz who entered into rest on November 3, 1987. She was born in Cross Roads on November 12, 1916, and was the daughter of the late J. Franklin and Lizzie D. (Hannigan) Saylor Freda was employed as a seamstress at the former L. Greif Brothers Company in Stewartstown for over 35 years, retiring in 1983. She was a former member of Cross Roads United Methodist Church for over 60 years, then she transferred to Stewartstown United Methodist Church. She was also a member of the Ladies Auxiliaries of the Erika Volunteer Fire Company and the Stewartstown American Legion. Mrs. Lutz is survived by a son, Deryl R. Lutz of Stewartstown and his wife Linda (Kohr); a grandson, Darrin M. Lutz and his fiance Shannon Rasinski of Abingdon, Md.; and a granddaughter, Rachel E. Quinn and her husband Colin of York; a great -granddaughter, Mackenzie E. Quinn of York; and several nieces and nephews. She was preceded in death by one brother, H. Furman Saylor, and a sister, Minnie I. Runkle. A viewing will be Wednesday, Oct. 9, from 10 to 11 a.m. at Cross Roads U.M. Church, 6881 Church Road, Felton, PA. Burg Funeral Home, Inc., 134 W. Broadway, Red Lion will be assisting the family with the arrangements. A Service of Honor and Praise for Freda will be Wednesday at 11 a.m. at the church. Her pastors, the Rev. Michael G. Trimmer of Cross Roads U.M. and Pastor Larry W. Parlett of Stewartstown U.M. will officiate. Burial will be in Round Hill Cemetery. In lieu of flowers, contributions may be offered in memory of Freda to Stewartstown U.M. Church, P.O. Box 398, 26 S. Main St., Stewartstown, PA 17363; or to Cross Roads U.M. Church, 13059 Crossroad Avenue, Felton PA 17322. Freda was a wonderful mother and grandmother whose greatest pleasure was being with her family and spending time at her summer home in Union County. She enjoyed tending to her gardens and working on her needlework, especially quilting, embroidery and crocheting. The family would like to express their sincere appreciation to the dedicated and caring staff at the Barbara J. Eagan Center for their service to Freda during the past four years. She will be sadly missed by all who knew and loved her . On line condolences may be offered at www.BurgFuneralHome.com

Freda E. (Saylor) Lutz, formerly of Stewartstown, entered into eternal rest after a brief illness on Friday, Oct. 4, at 3:50 p.m., surrounded by her loving family at Barbara J. Eagan Nursing and Rehabilitation Center in Shrewsbury, at the age... View Obituary & Service Information

The family of Freda E. (Saylor) Lutz created this Life Tributes page to make it easy to share your memories.