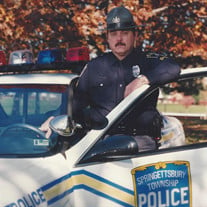 Frederick “Fred” Leroy Nestlerode of York, entered into God’s care, after a brief illness, on Tuesday, November 27, 2018, at his residence with his family by his side, at the age of 73. He was the husband of Debra Jane (Senft) Nestlerode to whom he married on February 14, 2001, celebrating 17 years together. Fred was born in Renovo, PA., on December 7, 1944 and was the son of the late Leroy Nestlerode and Margaret (Saxton) Steiger. He served his country in the United States Army during the Vietnam War, for two tours of duty. Fred was a law enforcement officer, serving the Mt. Joy community for six years, then working with the Springettsbury Township Police for 26 years. He continued working with the York County Sheriff’s Department for 8 years and retired from the Springettsbury Township Zoning Office after 7 years. He was a member of the Fraternal Order of Police, and was an avid sports fan. He was a former softball umpire and was a Cleveland Browns fan. Besides his wife Debra, he leaves two children, Margie C. Smith wife of Daryl of Lititz and Craig R. Nestlerode of York. Three grandchildren, Cameron Smith of Lititz, Kristen Nestlerode and Alexandra Nestlerode both of York. Fred leaves a sister, Joyce Seibel, wife of Richard from San Antonio, TX and a half brother, John Steiger, husband of Suzanne from Houston, TX. He was preceded in death by a sister, Teresa Getz in 2017. Cremation will take place with Burg Funeral Home, Inc., 134 W. Broadway, Red Lion. Burial will be in Greenmount Cemetery at the convenience to the family. No services are scheduled. When tomorrow starts without me, don’t think we’re far apart, for every time you think of me, I’m right there in your heart. www.BurgFuneralHome.com

The family of Frederick "Fred" Leroy Nestlerode created this Life Tributes page to make it easy to share your memories.

Send flowers to the Nestlerode family.