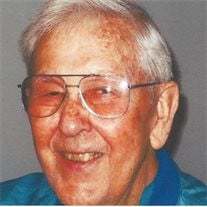 G. Willis "Willie" Shaeffer, formerly of Red Lion, entered into eternal rest on Monday, November 28, 2016, at 12:25 p.m. at York Hospital at the age of 86. He was the husband of the late Barbara M. (Young) Shaeffer, whom entered into eternal rest on August 20, 2011; they were married on July 1, 1950 and celebrated 60 years together. He was born in Red Lion on February 27, 1930, and was the son of the late Melville and Agnus (Tyson) Shaeffer. Willie worked as an Industrial Engineer at Teledyne McKay Co. in York, retiring after many years of service. He was a longtime and active member of St. John's United Church of Christ in Red Lion, serving on the Consistory Board; a member of the Elks in Red Lion. Willie also served on the Red Lion Cemetery and Historical Society Boards. He enjoyed hunting and fishing, especially with his children and grandchildren. He is survived by two sons, Gregory K. Shaeffer of Harrisburg and his wife, Pamela and Robin M. Shaeffer of Red Lion and his wife, Phyllis; six grandchildren, Joseph Shaeffer, Christopher Shaeffer, Michael Shaeffer, Marc Shaeffer, Sarah A. Ferguson Keene and Daniel Ferguson; twelve great-grandchildren, Michaela, Olivia, Tristan, Abigail, Jack, Camden, Gracie, Collin, Connor Shaeffer, Tyler Wolfgang and Breck and Collins Keene. One brother ,John Shaeffer of Red Lion and his two sister in laws, Joan French of Statesville, N.C. and Charlotte (Young) Brymesser of Red Lion; several nieces and nephews. He was preceded in death by a grandson, Jonathan Lee Shaeffer on July 15, 1975. Viewing will be held on Thurs., Dec 1st from 7 to 9 p.m. at Burg Funeral Home, Inc., 134 W. Broadway, Red Lion, and Fri., Dec 2nd from 10 to 11 a.m. at St. John's UCC, 161 N. Main St., Red Lion. The Service of Honor and Praise for Willie will begin at 11 a.m. Friday at the church, with his pastor, Rev. David D. Tietje, officiating. Burial will be at Red Lion Cemetery. Contributions may be offered to St. John's United Church of Christ; 161 N. Main St., Red Lion, PA 17356.

The family of G. Willis Shaeffer created this Life Tributes page to make it easy to share your memories.