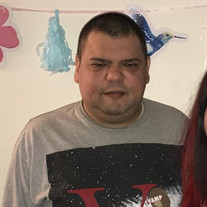 Fondly known to his family and friends as “Gabi”, Gabriel L. Berrios, accepted the hand of his Lord and turned his back on his earthly life on Friday, December 31, 2021 at 7:23 am at his residence at the age of 41. He was the husband of Jessica L. Berrios, of York, for 24 years. Gabi was born in Ceiba, Puerto Rico on June 12, 1980 and is the son of Raul Luna and Sara Perez, both of York. He worked at several places over the years until he was unable to due to his illness. He enjoyed playing with his play station, revamping RC cars, watching documentary shows, along with the Discovery Channel. Gabi loved to learn new things. He appreciated music, enjoyed Spanish cuisine and was very talented & creative with his artistic abilities. Nothing was more important to him than the time he was able to spend with his family, especially with his grandchildren. Gabi will be fondly remembered as a great husband, son, father, and grandfather. He always was able to turn any situation into a comedy show. Gabi and Jessica have four children, Jane M. Berrios of York, and her husband, Christofer Rosario, Jazlynn I. Berrios of York, Jayla M. Berrios of York, and Gabriella L. Berrios of York. He was the proud grandfather of Julian L. Rosario and Rosalyn M.J. Rosario. Gabi also leave his sister, Lulu A. Rivera, of York, along with his aunts, Lourdes Garett, of Oklahoma and Nilsa Perez, of York, his sister in law, Dawn Kinard, of York, and brother in law, John Watkins, also of York, as well as numerous family members. He is greatly missed by his service dog, a red nose, Minnie. He was preceded in death by his Maternal grandmother, Maria Geatan and his mother-in-law, Betty Watkins. Family and friends are invited to see Gabi on Monday, January 10th from 6-7 pm at Burg Funeral Home, Inc., 134 W. Broadway, Red Lion. A Service to Honor and Praise Gabi will begin at 7 pm with Rev. Steven A. Schmuck of Red Lion Bible Church officiating. Burial will be private and at the convince of the family at Susquehanna Memorial Gardens. Contributions in memory Gabi may be offered to American Diabetes Association, PO Box 7023, Merrifield, VA 22116 or to the York County SPCA, 3159 N. Susquehanna Trail, York, PA 17406.

The family of Gabriel L. Berrios created this Life Tributes page to make it easy to share your memories.

Fondly known to his family and friends as “Gabi”, Gabriel L....

Send flowers to the Berrios family.