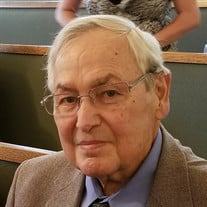 Garry “Lightbulb” Lee Leicht, of York, went home to his Lord and Savior, after a lengthy illness, on Wednesday, May 8th, at his residence with family by his side, at the age of 76. He was the husband of the late Charlene M. (Kraft) Leicht who entered into rest on May 2, 2003 and is the companion of Carol L. Bingaman of Dover for the past fifteen years. He was born in Windsor on October 12, 1942, and was the son of the late Edward D. and Viola I. ( (Olewiler) Leicht. Garry worked as an Inspector with the former Borg Warner which then became York International, for 35 years, before retiring in 2003. After retirement, Garry worked at Rutter’s on Leader Heights Road, making coffee and greeting patrons for ten years. He was a member of the Glenview Alliance Church in Glen Rock, where he served as a former Deacon and Head Usher. Prior to his time at Glenview, he was a member of the York CMA church, where he was a former Youth Group Leader and Sunday School teacher. He also assisted with the church camp at Summit Grove. He was a volunteer Fireman for 38 years with the Goodwill Fire Company, Station 19, in Spry . Garry was involved in farming, 4 H, and was a shepherd of sheep. He was a fifth generation market master at the Eastern Market; he enjoyed hunting, fishing and traveling, especially to Gatlinburg. He worked at Dollywood Park and assisted in building a church in Tennessee from the ground up. In his earlier years, he was the owner of GL Leicht Home Improvements, for many years. He would volunteer at food banks and grew fruits and vegetables in his garden, many times giving this produce to those who needed it. Besides his companion, Carol, he leaves his two daughters, Debra A. Donan and husband, Thomas of York, and Michele M. Altland and husband Robert, Sr., of Dallastown, and a son, David L. Leicht and his wife Felisa, of Jacobus. He was fondly known as Bop to his nine grandchildren, Thomas, Garry, Katie Donan, Kenneth, Rachael and Rebecca Leicht, and Robert, Jr., Preston and Joshua Altland, along with his twelve great grandchildren, Hunter, Thomas, James, Aiden, Patrick, Harper, Noelle, Abigail, Madison, Fawn, Jason and Cerena and two more on the way. He leaves his only brother, Dennis L. Leicht of Windsor, and two nephews. Viewings for Garry will be on Friday, May 10th, from 7-9 pm at Burg Funeral Home, Inc., 134 W. Broadway, Red Lion and Saturday, May 11th, from 10-11 am at Glenview Alliance Church, 10037 Susquehanna Trial South, Glen Rock. A Service of Honor and Praise for Garry will begin at 11 am at the church, with his pastor, Jeffrey A. Bean, officiating. Burial will be at Windsor Church of God Cemetery. Lightbulb, as Garry is known, was a very good Christian man, who loved the Lord with all his heart, and worked for the Lord every day. He knew how to make conversation with anyone he met and how to make them feel special, making all who knew him a friend. If you could see me now, you wouldn’t shed a tear. Though you may not understand why I’m no longer here. Remember my spirit, that the real me. I’m still very much alive, oh, if you only could see! I’ve beheld our Father’s face; I’ve touched my Savior’s hand. The angels all rejoiced as I entered the Promised Land. Beyond the gates of pearl, I walk on golden streets. I’ve touched the walls of jasper, dipped my foot in the crystal sea. The beauty is beyond words, nothing can compare. I’ve even seen your mansion; someday I will meet you there. Allow Jesus to be your guide, His word will show you the way. So, please don’t cry! WE WILL MEET AGAIN SOMDAY! In lieu of flowers, contributions may be offered to: Pappus House, 253 Cherry Street, York, PA 17402. Please visit: www.BurgFuneralHome.com for a more detailed obit.

Garry &#8220;Lightbulb&#8221; Lee Leicht, of York, went home to his Lord and Savior, after a lengthy illness, on Wednesday, May 8th, at his residence with family by his side, at the age of 76. He was the husband of the late Charlene M. (Kraft)... View Obituary & Service Information

The family of Garry "Lightbulb" Lee Leicht created this Life Tributes page to make it easy to share your memories.

Send flowers to the Leicht family.