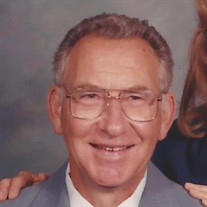 Gary Leon Flinchbaugh, of Red Lion, entered into rest on Wednesday, July 8, 2020 at 4:11 pm with family by his side, at the age of 84. He was the loving husband of Margaret J. (Grim) Flinchbaugh to whom he married on January 1, 1955, celebrating 65 years of marriage together. Gary was born in Springvale, on May 21, 1936, as was the son of the late Charles H. and Lois R (Overmiller) Flinchbaugh. After graduating from Red Lion High School, class of 1954. After high school, he went to work at Davey Products, then to Bendix in York, now known as Allied Signal in Townsend, MD, where he worked for many years prior to retirement. During his years of full time employment he also owned and operated Flinchbaugh's Service Center for over 31 years, coming home from working his day job and then working in the evenings for himself. Gary was a very hard working man. He enjoyed spending time at the Burns Run Hunting Camp located in Clinton County. Over the years, Gary served on numerous teams while bowling and playing golf. He also enjoyed sports, hunting, fishing, bike riding, as well as walking every day. He especially loved his family and every Sunday was considered family day! Besides his loving wife Margaret, Gary is survived by three children, Selena M. Flinchbaugh Neely and her husband Ralph H. Neely, Jr., of York, Scott E. Flinchbaugh and his wife Cindy Hope Keenan, of York Haven, and Sherry L. Flinchbaugh Mitchell Swope and her husband Charles Swope, of Strasburg. He is also survived by eight grandchildren, Lyndi R. Neely Falcon of Dallastown, Lisa M. Neely Viands (Troy J.) of Felton, Jennifer Flinchbaugh Goodling (Jeremy) of Grovetown, Janelle Flinchbaugh of York, Johnathan Flinchbaugh of York Haven, Eden Flinchbaugh of York, Judah Flinchbaugh of York Haven, and Heather Mitchell Murray (Michael) of White Settlement, Tx, as well as 18 great grandchildren; Jorge A. Falcon, III, Isabella Falcon, Sawyer Lighty, Juliet Lighty, Pierce Viands, Jack Viands, Carley Viands, Liam Viands, Taylr Goodling, Skylr Goodling, Adysn Goodling, Edyth Goodling, Dejah Wood, Kyrie Flinchbaugh, Leela Nesbit, Dominic Mitchell, Doniven Mitchell, and Radiance Murray. Gary also has a sister, Diane Anderson (Ross) in York, along with nieces and nephews. He was preceded in death by a grandson, Shaun Mitchell who passed on June 7, 2013, a brother, Lonnie Flinchbaugh, a sister, Patricia J. Flinchbaugh. A viewing for Gary will be on Tuesday, July 14th, from 9:30 – 10:30 am, at The Abundant Life Center, 3930 Farm Dr, York. A Service of Honor and Praise will begin at 10:30, with Pastor William M. Hake officiating, Burial will take place at Susquehanna Memorial Gardens following the service. Burg Funeral Home, Inc., 134 W. Broadway, Red Lion, is assisting the family with the arrangements. In lieu of flowers, contributions may be offered in memory of Gary to : Grace Academy, 3930 Farm Dr., York, PA 17402. On line condolences may be offered at: www.BurgFuneralHome.com

Gary Leon Flinchbaugh, of Red Lion, entered into rest on Wednesday, July 8, 2020 at 4:11 pm with family by his side, at the age of 84. He was the loving husband of Margaret J. (Grim) Flinchbaugh to whom he married on January 1, 1955, celebrating... View Obituary & Service Information

The family of Gary Leon Flinchbaugh created this Life Tributes page to make it easy to share your memories.

Send flowers to the Flinchbaugh family.